Tariffs on Chinese Goods Will Only Punish Americans 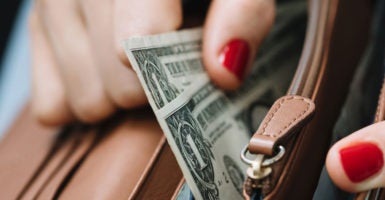 The Office of the U.S. Trade Representative will soon be imposing an additional 25 percent tax on $50 billion worth of goods Americans buy from China.

The reason given by the White House is multifaceted, including factors from addressing China’s intellectual property theft and technology transfer requirements to unfair competition and an uneven balance of trade.

Making trade less free through new taxes on imports, however, will have minimum impact in any of these areas. More than anything else it will hurt the American economy.

Ongoing trade negotiations between Washington and Beijing have been rough. A recent trip to Beijing by Commerce Secretary Wilbur Ross resulted in a proposal by Beijing to purchase up to $70 billion worth of U.S. goods—mostly in agriculture, energy, and some manufactured goods.

This was apparently not enough for the administration—which is actually good, because it would have done nothing to get at the structural market access issues that are a leading problem. National Economic Council Director Larry Kudlow, in fact, has indicated that the White House may now be more interested in these structural changes in China than outright purchases.

The White House has suggested these tariffs will protect American jobs. Yet, one study estimates the effect the initial list of tariffs (and retaliatory tariffs) will have is a loss of roughly 134,000 American jobs, the biggest job losses being in the agriculture and service sector industries. Any further escalation in tariffs could put as many as 450,000 American jobs at risk.

Until the U.S. and Beijing can come to an agreement, those impacted by tariffs will lobby politicians for exclusions, tax breaks, and subsidies—creating even greater unfairness in the market. Other countries like Canada, those in the European Union, and Brazil will likely reciprocate with new subsidies of their own, creating a disastrous downstream effect in the global trading system.

Sadly, tariffs by the White House won’t bring back jobs that have been lost to China—not in the way corporate tax reforms and deregulation have. And tariffs won’t significantly deter theft of intellectual property. Even if China makes structural changes, this doesn’t mean the balance of trade will change as the cost of doing business in China decreases.

The U.S. trade representative will impose a 25 percentage point increase on a total of 1,102 items imported from China. These items come from two lists: the first from a list first announced in April that includes 818 items, the other 284 items from a new list that the trade representative has just made public.

The first list targets roughly $34 billion worth in goods bought from China. It includes items like parts for airplanes, motor vehicles, railway, industrial machinery, and electric generators. Consumers may very well see an increase in the cost of TVs, construction materials, and nuclear reactors as a result of these tariffs, which will go into force on July 6.

The second list targets roughly $16 billion worth in goods bought from China. Items on this list target sectors Beijing is investing in with its industrial policy known as “Made in China 2025.” It includes things like certain chemicals, electronic circuits, and agricultural machinery. This list still needs to go into a period of public commentary and hearing before going into effect.

The items on these lists also reflect the U.S. sectors on which the White House will place restrictions on Chinese investment. That list will be announced on June 30.

China’s Ministry of Commerce has announced its own lists to reciprocate. The first list targets roughly $34 billion in U.S. exports and will go into effect July 6. This list targets mostly agricultural and farm products. U.S. farmers exported $12 billion in soybeans to China in 2017.

China’s second list, also targeting roughly $16 billion, will go into effect at a later time. This list targets mostly energy, chemical, and gas products. In 2017, the U.S. exported to China $400 million in coal, $1.7 billion in propane, and $4.4 billion in crude oil.

The White House still has until July 6 to change its course. In the process, it should focus on the issues that precipitated the action—China’s policies on high-tech intellectual property, as well as the broader treatment of foreign investment.

Imposing new taxes will do the American economy no good.