The Absurdity of Propping Up 2 Favored Solar Companies 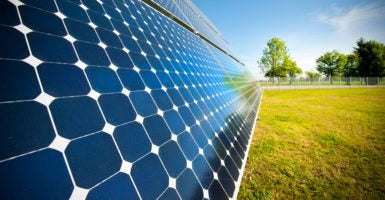 Suniva and SolarWorld have asked the federal government for protection from the international solar industry. (Photo: iStock Photos)

One of the many problems of having a massive federal government is that sometimes, its own agencies work at cross-purposes.

On the one hand, the government has been busy for decades subsidizing the solar industry with exorbitant handouts. On the other, the U.S. International Trade Commission is now poised to make a decision on steep tariffs that would make solar power so expensive as to challenge the industry’s existence in the U.S.

How exactly did this self-defeating prospect come about?

Earlier this year, two solar manufacturing companies—Suniva and SolarWorld—petitioned the International Trade Commission to investigate the effects of solar cell and panel imports.

They allege that domestic solar cell and panel manufacturing “cannot survive” without federal intervention—specifically, through globally applicable tariffs and price floors that would roughly double the price of solar cells and panels.

The International Trade Commission must decide by Sept. 22 whether to recommend that President Donald Trump act on the petition. Should the commission recommend shielding these select few companies from competition, the Trump administration will be working at cross-purposes with another batch of government subsidies for solar energy.

Specifically, the solar industry has for decades received special tax credits, grants, loan programs, regulatory preferences, research and development, and other programs to “jumpstart” the solar industry that have cost taxpayers billions over the last three decades. In fact, the solar industry is the most subsidized energy resource in America, according to the University of Texas at Austin.

Raising tariffs on solar imports, as the commission is now contemplating, would work at complete counter purposes to these government subsidies. The tariffs requested by Suniva and SolarWorld will make solar products and services in America more expensive and less competitive by removing inexpensive, often imported choices from other solar companies and their customers.

The Solar Energy Industries Association and Goldman Sachs both project these tariffs would cost thousands of solar jobs—and past experience in the steel industry suggests they’re right.

Simply put, it makes no sense to heavily subsidize the solar industry in order to “jumpstart” it, while at the same time jeopardizing its very existence with anti-competitive tariffs.

The truth is, neither subsidies nor tariffs will make the solar industry more competitive in the long term. Both approaches tie industry success to the whims of politicians.

They also reward failing companies and technologies, while making it harder for promising ones to rise above the competition that is propped up by the federal government. And, they both remove the incentive for companies to innovate and build better business models that actually make solar power competitive in America.

Trump has spoken frequently about his desire to see American companies be competitive. The Trump administration should put actions to words and not cave to Suniva and SolarWorld’s petition for tariffs.

The solar industry should be allowed to compete on its own merits, free of any government intervention—be it subsidies that seek to prop up the industry, or tariffs that doom it to mere subsistence.

Note: This article has been modified since its original publication.