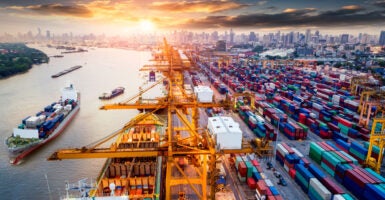 Members of Congress are urging the administration to reinstate the eligibility of U.S. trade partners, such as India, Thailand, and Turkey, to the Generalized System of Preferences. Pictured: Shipyards in Bangkok, Thailand. (Photo: Thatree Thitivongvaroon/Getty Images)

The House of Representatives voted unanimously Sept. 22 to reauthorize the Caribbean Basin Trade Partnership Act. The act is a trade preference program that eliminates tariffs on organic chemicals and textiles, and was up for renewal by the end of September.

Although reauthorization of the program is a step in the right direction, Congress missed an opportunity to kill two birds with one stone by neglecting to link the renewal of the act with that of the Generalized System of Preferences.

The Generalized System of Preferences is a similar, larger program that eliminates taxes (i.e., tariffs) on more than 5,000 products. The program helps the United States and developing countries grow their economies and deepen trade relations, all while helping Americans save money.

Members of the House Ways and Means subcommittee on trade originally proposed the idea to connect the two programs’ renewals during a hearing earlier this month.

Reps. Kevin Brady, R-Texas, and Vern Buchanan, R-Fla., sent a letter calling for this move and warned the committee that “a lapse of [either agreement] would be costly for U.S. manufacturers. … In order to minimize uncertainty for U.S. companies and their partners in developing countries at this particularly vulnerable time, both programs should be renewed together.”

Just because members missed this chance to renew the Generalized System of Preferences now, does not mean they should stop pushing for its early reauthorization and extension. Despite numerous lapses, strong bipartisan support does exist for the program, especially when considering that it saved Americans more than $1 billion in taxes in 2019 alone.

The program, set to expire Dec. 31, typically is renewed for a period of only two years. But a new Heritage Foundation report urges Congress to renew the program for at least 10 years, which would provide greater certainty and job security, and allow more individuals to benefit from the program.

The Coalition for GSP advocates for the program’s renewal and cites Kona Bicycle as an example of a company receiving those benefits. Kona, which provides biking equipment, was able to hire five workers and increase sales by more than $500,000 thanks to the 2018 renewal of the agreement.

The Generalized System of Preferences also is credited with encouraging innovation and allowing companies to improve benefits for employees. Officials with Summit Specialty International, which imports pine doors for home construction, said the preferences have enabled it to increase salaries for workers and provide health insurance for its entire staff.

It is stories such as these that inspired more than 250 businesses and associations to sign on to a letter urging Congress to renew the agreement. The letter echoes the concerns of Brady and Buchanan and goes a step further by pushing for the U.S. to reinstate India and Turkey as beneficiaries of the program.

The letter also encouraged the Trump administration to avoid terminating a portion of Thailand’s benefits, but approximately one-third of the country’s eligibility was removed in April 2020.

Matr Boomie, B&C Technologies, and Fab-Line Machinery, all signatories to the letter, import items almost exclusively from India, Thailand, or Turkey. In the past, the Generalized System of Preferences had allowed these companies to grow, hire employees, introduce new product lines, and increase wages and benefits for staff. But, with three of the largest beneficiaries losing their eligibility within the last year, these companies could suffer irreparable losses.

In June, United States Trade Representative Robert Lighthizer did comment that the U.S. and India were in discussions about potentially restoring India’s benefits, but no action has been taken yet.

Although the Generalized System of Preferences does not expire until the end of the year, renewing and extending the program sooner rather than later can spare Americans from another costly lapse.

Over the past four decades, the Generalized System of Preferences has saved Americans billions of dollars in taxes. It’s time for Congress to embrace it for the long term and prioritize its reauthorization.