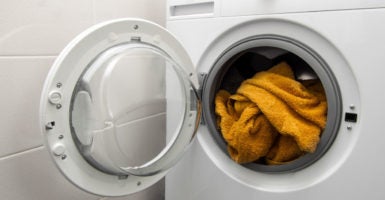 The report acknowledged that the tariffs imposed on washing machines in January 2018 had mixed effects. Domestic production “increased by 2 percent between December 2017 and [December] 2018,” but the consumer price index “for washers and laundry equipment increased by 12 percent.” (Photo: George Mdivanian / EyeEm/ Getty Images)

Each year, the Council of Economic Advisers releases the “Economic Report of the President,” which assesses the state of the U.S. economy and the impact of the current administration’s policies.

The 2019 report was published this week, and it contains valuable information on the economic effects of the Trump administration’s approach to trade.

Oftentimes, this statistic is misunderstood as a tax on foreigners. That isn’t accurate. The U.S. average applied-tariff rate is the average rate that it costs for Americans to purchase things from abroad.

When this data point increases, it means that it’s more expensive for Americans to import.

The simplest way to measure the cost increase for Americans is to look at government tariff revenue. In 2018, the Council of Economic Advisers reports, $14.4 billion in revenue was collected from goods subject to new tariffs. Put another way, the Trump administration increased taxes on Americans by $14.4 billion last year.

Tariffs typically benefit a small group of people, leaving these costs to be dispersed across the economy. For example, the tariffs on steel and aluminum—vital inputs for many U.S. manufacturers—caused both the imported and domestic prices of those products to rise.

As a result, the report notes, “employment in alumina and aluminum production rose by 100 jobs … [and] iron and steel mills and ferroalloy production employment [increased] by 6,200” between March and December 2018.

On the other hand, manufacturers that use these inputs had to modify supply chains or apply for exclusion from the tariffs to avoid paying higher tariffs. Many companies were unsuccessful in those efforts and instead found ways to offset the higher prices, such as through cutting investment or decreasing labor costs.

Sometimes, the real impact on individuals is hidden because businesses work to absorb as much of the increased costs as they can. Despite these factors, the Council of Economic Advisers did not assess the negative effects of the steel and aluminum tariffs.

The report does acknowledge that the tariffs imposed on washing machines in January 2018 had mixed effects.

Domestic production “increased by 2 percent between December 2017 and [December] 2018,” but the consumer price index “for washers and laundry equipment increased by 12 percent.”

The cost increases for the industry could also be related to the tariffs on steel and aluminum, but the Council of Economic Advisers did not take that into account.

Imposing new tariffs on imports has been a cornerstone of trade policy for the administration. The council argues that the tariffs “are designed to protect American workers, firms, and national security.”

However, those objectives are being addressed by imposing new taxes on American families and businesses.

The better—indeed, the best—way to achieve the Trump administration’s economic policy goals is to embrace the conservative principles of greater freedom and smaller government.

In the context of trade, that means focusing on opening new markets for U.S. exports, rather than making it more expensive for Americans to purchase from abroad.