Parsing the President’s Tweets on Tariffs Amid China Trade Talks 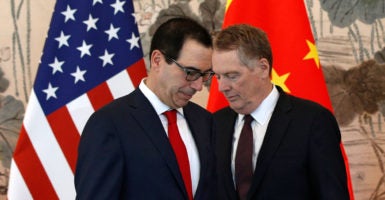 It’s crunch time in U.S.-China negotiations, and President Donald Trump may have just thrown negotiators under the bus.

Over the weekend, Trump tweeted that perhaps trade talks with China aren’t going as well as we’ve been led to believe. This prompted domestic and international markets to respond with pessimism.

The president declared that the tax on the $200 billion in imports will increase to 25% by Friday. And he continued to threaten that every other good we buy from China will soon see an import tax of 25%:

For 10 months, China has been paying Tariffs to the USA of 25% on 50 Billion Dollars of High Tech, and 10% on 200 Billion Dollars of other goods. These payments are partially responsible for our great economic results. The 10% will go up to 25% on Friday.

325 Billions Dollars of additional goods sent to us by China remain untaxed, but will be shortly, at a rate of 25%. The Tariffs paid to the USA have had little impact on product cost, mostly borne by China. The Trade Deal with China continues, but too slowly, as they attempt to renegotiate. No!

This news is not just concerning for American consumers, given that almost 18% of all our imported goods and services come from China. The immediate shift in taxes comes as an unexpected shock following the optimistic tone coming from the White House last week.

Last week, lead negotiator Ambassador Robert Lighthizer and Treasury Secretary Steven Mnuchin were in Beijing for talks. Mnuchin tweeted Wednesday that these talks were productive, and he was looking forward to this week’s negotiations:

The leader of the Chinese negotiating team, Vice Premier Liu He, was supposed to visit Washington this week with a delegation of over 100 officials. However, the president’s remarks may sour these plans. We will see as events develop.

It’s difficult to say for sure why Trump decided to tweet over the weekend in a fashion that could derail U.S.-China negotiations this week.

Some suggested the Chinese side has been walking back some of its initial promises. Another reason may be that the president is taking a tough negotiating position to prevent the Chinese side from attempting to move in the margins as we enter the final rounds of an agreement.

Either way, here are two things to remember.

First, the Chinese don’t pay American taxes. The taxes on Chinese imports are paid by American importers. Several studies over the past year show that these tariffs aren’t negatively impacting Chinese producers the way the Trump administration thinks they are.

Second, Trump also tweeted that the U.S. has been losing $500 billion on trade with China—a possible reference to the U.S. trade deficit with China, which was $389 billion in 2018.

The trade deficit with China in fact has grown from a quarterly average of about $85 billion to roughly $100 billion since the trade war with China began.

What is important to understand, however, is that the U.S. isn’t “losing” money on trade with China. Americans are paying for products and services.

This is one of almost a dozen misconceptions most people have of the U.S.-China economic relationship.

We’ll see whether the president’s messaging helps finalize—perhaps before the Group of 20 summit in late June—or prolongs the U.S.-China trade war. Until that time, keep your eyes on the real cost and benefits of trade.