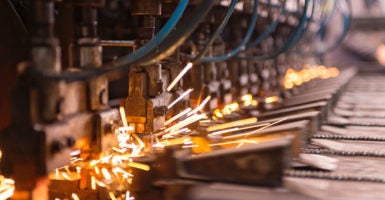 The president's new tariffs are forcing steel-using industries in the U.S. to pay higher prices for steel. (Photo: nimis69/Getty Images)

Alec Fornwalt is a member of the Young Leaders Program at The Heritage Foundation.

Economists and industry leaders predicted price increases and potential jobs losses after the Trump administration imposed tariffs on steel and aluminum. What may have seemed like rhetoric is now reality.

The sneaky brilliance of the tariffs is that benefits are concentrated to a small, politically connected, and very vocal few, while costs for American consumers are widely dispersed.

That fact skews the narrative, but meanwhile, scores of American businesses are suffering the consequences.

The House Ways and Means Committee in April held a hearing on the effects of tariffs. Among those testifying at that hearing was Kevin Kennedy, the president of Kennedy Fabricating.

Kennedy Fabricating is a company that uses steel and, according to its website, is “the leading custom steel fabricator serving the [telecommunications] industry in the southern U.S. and is a preferred vendor with numerous national cell tower owners, operators, and general contractors.”

In his testimony, Kennedy spoke about how the family-owned business survived many economic hardships, including the 2008 market crash, but said that the steel tariffs seem like the worst thing to happen to the company yet.

[W]ithout any competition, U.S. steel producers have raised prices over 40 percent. Why should we pay 40 percent more here than our foreign competitors pay in their countries?

This means that a company in China can now purchase a raw steel beam from a Chinese mill at a 40 percent discount, drill two holes in it, and ship it to the U.S. as a fabricated good without a tariff.

Furthermore, he added, “it’s not just China. One of our Canadian competitors just went from a position of losing projects to us to now winning projects at our expense, because they can import raw steel to Canada without a tariff and purchase it 40 percent cheaper than we can from our own domestic suppliers.”

Kennedy Fabricating isn’t the only company being hit hard. In fact, many companies are appealing to the government for exemptions from the tariffs.

So many companies are being affected that many of them joined forces to form the Coalition of American Metal Manufacturers and Users. The coalition’s spokesman, Paul Nathanson, explained the problems with the new tariffs:

These tariffs will do nothing to uphold their stated purpose of protecting U.S. national security. They will instead hurt U.S. manufacturers in the near term by raising the price of the essential inputs they need to make finished products, and do long-term harm to domestic steel producers by eroding their own customer base.

Another group similar to the Coalition of American Metal Manufacturers and Users had the opportunity to make its voice heard at the Ways and Means Committee hearing. The Motor & Equipment Manufacturers Association comprises more than 1,000 companies that manufacture vehicle parts.

Ann Wilson, senior vice president of the association, testified about the tariff-exclusion application process and the issues companies have experienced. The “[exclusion] process is already creating significant burdens on these companies,” Wilson said. “The exclusion-request process lacks transparency and will be particularly burdensome for small manufacturers. It is unbalanced and appears to not allow for successful outcomes for downstream users.”

The process established by the Commerce Department penalizes American companies for using imported goods as inputs, even if the source country is a free-trade partner and the imports in question are being sold at market value.

Let’s hope that the Trump administration will heed these companies’ warnings and put an end to these ineffective and dangerous tariffs soon.