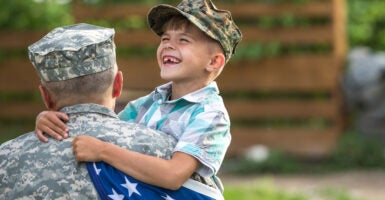 Veterans Day is an opportunity to learn and reflect on the principles of service, commitment, honor, selflessness, and patriotism that veterans model. (Photo: Peppersmint/iStock/Getty Images Plus)

This Veterans Day, we have great reason to thank our many veterans and reflect on the immeasurable value of their service.

Celebrated every year on Nov. 11, what we now know as Veterans Day was originally called Armistice Day, which honors the day in 1918 when a ceasefire was called, leading to the end World War I.

After World War II and the Korean War, in 1954, Congress officially changed the name of Armistice Day to Veterans Day.

The holiday is distinct from Memorial Day, which emphasizes remembering the fallen. The purpose of Veterans Day is to serve as an opportunity to reflect upon and honor the past—and ongoing—contributions of American veterans.

Each year, new veterans rejoin civilian society, having faithfully discharged their duty. But for civilians who are unfamiliar with the culture and inner workings of the armed services, the contributions of veterans in building the world in which we live are easy to overlook.

Threats to American interests from terrorist organizations and from countries such as Russia, China, and North Korea persist in their subtle and overt aggression around the globe, and the American armed forces relentlessly defend those interests wherever they are needed.

Americans can rest easy at night because the U.S. armed forces do their job well. And the seamlessness with which many veterans reintegrate into civilian society, contributing through leadership, resilience, and innovation to the public and private sectors, makes the gravity of their sacrifice easy to overlook.

Veterans Day is an opportunity for Americans to intentionally reflect on what may be overlooked and to consider how best to honor their sacrifices, perhaps in new ways.

The first thing an individual can do is recognize that the holiday is specifically designed to encourage gratitude and reflection, not necessarily memorial or celebration. It is an opportunity to learn and reflect on the principles of service, commitment, honor, selflessness, and patriotism that veterans model.

For example, reflect on the depth of their commitment: The entirety of a veteran’s sacrifice goes beyond the years of their life they dedicated to the service, to include their individual skills, their physical and mental well-being, and the work they contribute to civilian society after service.

Consider the expense and discipline of their service. Veterans are generally successful at reintegrating into civilian society, bringing unique perspectives, skills, and experience to the workplace.

They model a loyalty to the greater good to communities in which they live. Veterans also serve in their communities, often at rates of volunteerism higher than those of the civilian population.

And we can appreciate the honor and patriotism they demonstrate by executing their duty to the country as it is, without losing faith in America’s potential to improve and grow to be better.

It’s an honor to have veterans living in our midst today who we can personally honor and thank. So, let’s thank them.

But civilians can also listen to veterans’ experiences, show up at parades, donate to VA advocacy groups, write letters, visit VA hospitals, and especially support the reintegration of veterans for whom the transition is not as easy.

Also, remember the bigger picture. We can honor their sacrifice through our own commitments to participate in the growth, security, and future of this country. In each of our individual callings, we can work alongside them to defend the freedom and prosperity of your nation and fellow citizens.

The unique qualities that make America exceptional in the world begin here, with those dedicated to serving, defending, and bettering our nation.

Thank you, veterans, and happy Veterans Day to all!