How You Can Celebrate Veterans Day the Right Way 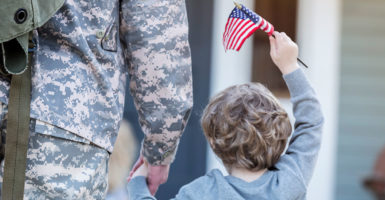 "There will never be a day in which the U.S. military isn’t ready to protect our country no matter the cost," write Tom Spoehr and Jack Penders. (Photo: SDI Productions/Getty Images)

“Word to the nation: Guard zealously your right to serve in the Armed Forces, for without them, there will be no other rights to guard.”

On Monday, Veterans Day will be celebrated across the United States. The holiday, originally named Armistice Day, marked the end of fighting in World War I when the Allies and the German Empire declared a cease-fire.

The holiday has continued to evolve with the nation.

After World War II and the Korean War saw millions of Americans put into uniform, Congress knew that all who served must be honored. On June 1, 1954, Armistice Day was amended to Veterans Day to reflect all of their contributions to protecting freedom and the homeland.

Even to this day, there is some confusion among Americans about the differences between Memorial Day and Veterans Day, but the distinction matters.

Memorial Day is a chance to remember all the men and women who have died in service to our country. Veterans Day is a celebration of all the service members and veterans who have served our country.

There are currently more than 18.2 million veterans in the U.S., making up almost 10% of the entire adult population. Statistics show that these veterans thrive in the workforce because they bring their unique skills and leadership to nearly every industry and community in our country.

Veterans from the 9/11 era hold an employment rate of approximately 78%, a full 8% higher than the civilian population. Additionally, in 2015 it was shown that veterans’ yearly average income reached $80,000, as compared to only $68,000 among non-veterans.

Their success doesn’t stop there. According to a 2017 study by the Graduate Center at the City University of New York, 1 in 8 young adults in America did not graduate from high school. By comparison, only 1 in 33 veterans failed to graduate.

Local communities especially benefit from having resident veterans because their civic participation and volunteerism are unmatched.

>>> Find out how you can serve veterans in your own community.

Veterans vote in local elections at a rate of 73.8%. Non-veterans vote at a rate of only 57.2%. They also put in an average of 177 hours of volunteer work each year, 25% more than the rest of the population.

These are America’s future leaders and innovators, individuals dedicated to bringing military values to the federal government and private sector.

As a civilian, it isn’t always clear how to appropriately honor the veterans who still walk among us. Not everyone can attend Veterans Day parades or afford to donate to veterans advocacy groups.

Fortunately, there are many ways to express your gratitude.

Simply speaking to a service member about their experiences, visiting a VA hospital, or writing to troops deployed overseas are all great ways for citizens to do their part. Participating in the Veterans Day moment of silence, observed for two minutes at 3:11 p.m. Atlantic Standard Time, is another simple yet effective way to take part in the day.

Unfortunately, it appears there never will be a war to end all wars, but there also will never be a day in which the U.S. military isn’t ready to protect our country no matter the cost.

Thank you to all who have served, and happy Veterans Day.