Veterans Sacrificed Their Freedom So That We Can Enjoy It 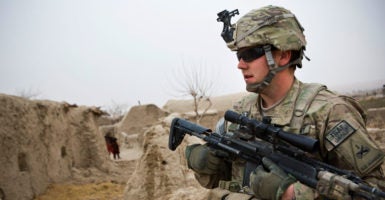 The U.S. has 240,000 active-duty and reserve troops stationed in 172 countries and territories. (Photo: Andrew Burton /Reuters/Newscom)

Our veterans deserve more than an official holiday and special sales at Walmart and Kohl’s. They warrant our thanks for putting themselves in harm’s way to protect us from our enemies, particularly since 9/11.

As the most recent terrorist attack in New York City demonstrated, radical jihadists have not abandoned their goal of a global caliphate.

President Ronald Reagan insisted that peace was only possible through strength, and sometimes through a display of strength. That’s why we have 240,000 active-duty and reserve troops in some 172 countries and territories, including Afghanistan, Iraq, Syria, Yemen, Niger, and Somalia.

There are also U.S. troop deployments in Japan, South Korea, Germany, Britain, and Bahrain. Nearly 38,000 troops are on undisclosed but risky missions.

Veterans Day began as Armistice Day on Nov. 11, 1919, on the first anniversary of the end of World War I. Starting in 1921, many Americans began wearing an artificial flower—a red poppy—to commemorate those who had died in war.

President Ike Eisenhower signed legislation in 1954 to change the name to Veterans Day to honor those who served in wartime.

Here are a few facts to keep in mind this Veterans Day.

There are 18.5 million military veterans in America. The breakdown by war is:

Many carry the wounds of war. Today, about 3.8 million veterans live with service-related disabilities.

Along with our policemen and firefighters, veterans deserve our special thanks for their service to our country. Fr. Dennis Edward O’Brien, a Marine priest, described our obligations this way:

Let us pause this Veterans Day, for just a moment, to give thanks for the dedicated men and women who put their lives at risk so that we might continue to enjoy ours.