On Veterans Day, Let Us Honor Those Who Served as Well as Those Who Stood by Them 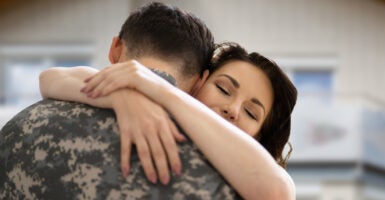 On this Nov. 11, take a moment to share your gratitude for the life and service of our veterans. And then take one more moment to thank the ones standing next to them for the incredible sacrifices they have made while in the shadow of another. (Photo: AndreyPopov/Getty Images)

Earlier this year, a team of America’s finest welcomed another hero into the hallowed ground of Arlington National Cemetery. The day was sunny but cold, and the view from that Northern Virginia hillside was just as majestic as it was solemn.

Many of those who gathered that day had served together and had known the departed for more most of their adult lives. One or two others had never known the day’s honoree at all. Collectively, our number was small by any standard, but we came.

>>WATCH: This Veterans Day, watch the inspiring story of E.W. Richardson, a World War II B-24 Liberator pilot, a former POW, and, later, a businessman, family man, and philanthropist.

We were there not to watch a horse-drawn caisson, or to see a rifle squad fire its volley, or to hear a lone bugler play taps in honor of a warrior’s passing. There would be no such procession that morning because this celebration was for one who lived and served in the service of another.

Like countless spouses before her, Carol Creech was driven by something unfamiliar to those who clamor for the limelight. She had a vibrant career in the private sector long before she married into the service, and she could have opted to continue on that path. Rather, she chose to embrace a shared commitment with her husband, to be part of something she placed above self—to Gen. Bill Creech, and to the United States Air Force he spent most every waking hour leading.

At times Carol served right by his side, hosting engagements for dignitaries and airmen alike. She was equally at ease in the presence of the pope as she was planning huge events like the Air Force Ball. Throughout it all, she carried a special elegance and grace, a sharp wit and quick sense of humor—traits that helped those she touched be the best versions of themselves and be at ease in her presence.

And Carol served in his absence. During his deployments and absences, she endured intense periods of isolation and the kind of crushing loneliness that a lesser person would never willingly bear for another. She dedicated those times of separation to improving the lives of spouses who weathered that same loneliness, while bearing the weight of a household on their own.

In a life that continued to accelerate beyond her husband’s retirement from active duty, Carol’s devotion never wavered. Through countless dinners with CEOs from Fortune 500 companies to mentoring sessions with active-duty airmen of all grades and calibers, she never missed a beat or nonverbal cue buried in an evening’s conversation.

She was her husband’s steadfast supporter. Often in the middle of diners, she would quietly pull a small container of dressing from her purse and carefully spread it on her husband’s salad. And if anyone asked about that poorly masked effort, she would smile and say if she didn’t guard his diet, no one else would.

Like thousands upon thousands of spouses before her, Carol Creech served this nation in ways that will never be recognized.

A chaplain once said you cannot buy a place in Arlington National Cemetery. Whether general, sergeant, lieutenant, or private, every place must be earned. As we stood on that hill filled with legends and heroes that morning in March, there was no doubt that Carol Creech had earned hers. She rests now in that hallowed ground with her beloved husband Bill, and her name is forever etched in stone—right behind his.

On this Nov. 11, take a moment to share your gratitude for the life and the service of our veterans. And then take one more moment to thank the ones standing next to them for the incredible sacrifices they have made while in the shadow of another.