The Real Value in Veterans That Hollywood Doesn’t Show You 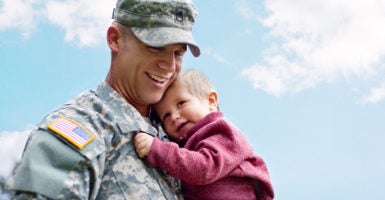 Nov. 11 is the day we celebrate Veterans Day. For many of us who have served, it is an important day; to large parts of Middle America, it is a time to celebrate; and to others, they couldn’t care less.

What should this day mean to every American? Are we properly serving our veterans? Are veterans burdens, or assets?

By way of education, Nov. 11 actually started out as Armistice Day, commemorating the 11th hour of the 11th day of the 11th month in 1919. This is when the Treaty of Versailles was signed, ending World War I.

This was to be the war to end all wars. It wasn’t—but America celebrated the holiday in honor of those who fought in it, until the much larger World War II came and passed.

After World War II in 1947, at the prodding of the citizens of Emporia, Kansas, and with the help of then-Gen. Dwight D. Eisenhower, Armistice Day became Veterans Day.

Today, many people tend to confuse Memorial Day and Veterans Day. The former is intended to honor those who have given their lives in service of the nation. The latter is designated to honor all those who have served, both living and dead.

To some, this is a difference without a distinction. But to those who have served, the difference couldn’t be starker.

If you have served in uniform, you hold the sacrifice of those who have died as sacred. No one who has served in the armed forces—even the most decorated of veterans—feels they are quite in the same category as those who made the ultimate sacrifice.

As such, Memorial Day is especially poignant for those who have worn a uniform.

Where does that leave us relative to Veterans Day?

On Veterans Day, we honor again those who died, but it is a special time for recognizing the cost also paid by those who served, and lived.

Many have a vision of older men (and women), wearing ball caps that read “U.S. Marine” or U.S. Army (ret.),” or perhaps the uniform caps of the American Legion, the Veterans of Foreign Wars, or other service organizations, with white hair, misty eyes, and shaking salutes when taps is played.

But there is a bigger picture than that now. After more than a decade of war provoked by the horrific 9/11 terror attacks, we now have a new generation of veterans.

The combat since 9/11 has lasted a long time. It involved a huge number of troops. Despite desperate fighting, and in some cases terrible wounds, the vast majority of veterans have returned to America, and that is a blessing.

Unlike those dark days during the Vietnam War, when the left blamed veterans for the war they were sent to fight and treated them shamefully, veterans today are thanked.

This is a huge step forward in maturity for our nation. Even those who disagreed with the war do not take it out on the men and women who served us so honorably.

There is, however, a trend developing, fostered by those who wish our nation ill, that must be pointed out.

Apparently too cowardly to buck the trend of gratitude to our troops, but longing for the days of the post-Vietnam War era where veterans were ostracized and typecast as broken and dangerous time bombs, ready to explode, the left works to pigeonhole them again.

Look at the movies now coming out. A standard narrative is the psychological damage of war, and how the nation has “used” these young citizens.

It’s true enough that many veterans need help dealing with post-traumatic stress disorder and traumatic brain injuries. Suicide among veterans is far too high—even one is too many. Those who need help and support must be given access to it.

It is to America’s credit that the grass roots of the country have rallied around veterans and are finding newly innovative ways to help every day. But veterans’ struggles with PTSD are not the whole story.

The vast majority of veterans, active duty and reserve, have returned to America and have reintegrated. They have found jobs, and built families, and are contributing positively at every level of American life.

Far from being the broken victims depicted by Hollywood, they are doing what the greatest generation did after World War II and the Korean War, but were not allowed to do after Vietnam—they are fueling American life.

Their leadership, their maturity, their innovation, and their resilience exceeds that of their non-veteran peers. They are assets to the nation, not burdens.

Across America, veterans are starting companies, nonprofits, and ministries. They are filling the ranks of management and leadership in already-established firms and in government. They are not waiting for a handout—they are taking charge and contributing.

At the same time, they are not forgetting their sisters and brothers who have those deeper wounds. Many of the newer veterans service organizations (such as Concerned Veterans for America) are reaching out to help.

As veterans move up successfully in organizations, they consciously look for other vets to help. Those who have fought know better than anyone else that one can survive a war and still be a casualty, and they live (still) by the code of “leave no one behind.”

So America, on Veterans Day 2017, don’t just say “Thanks for your service” to the vets you encounter. That is wonderful—we appreciate it greatly. But also take the time to listen to them, attempt to understand them, and above all, to realize that they are ready to work with you to continue to bless America.

Their stories will reignite your realization that America is not “done.” Their strength will motivate you to be a better citizen. Their willingness to continue to serve our wonderful country will cause you to swell with pride that America is still producing young men and women who are a new greatest generation.