Left Should Blame Themselves, Not Trump, for the Riots 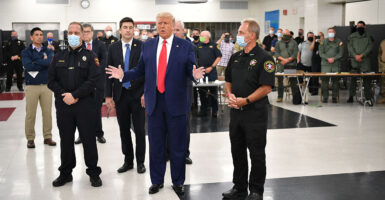 President Donald Trump speaks with local officials on Sept. 1 at Mary D. Bradford High School in Kenosha, Wisconsin, following the social unrest spurred by the police shooting of Jacob Blake, an African American, in the back. (Photo by Mandel Ngan/AFP/Getty Images)

In riot-torn Kenosha, Wisconsin, President Donald Trump met with local law enforcement officials Tuesday and promised to help stricken residents rebuild their lives. One would hope that those across the political aisle would respond by joining in a bipartisan effort to heal and rebuild. But that’s not what happened.

The opportunity was there. After months of downplaying the damage and danger of riots playing out in cities across America, the progressive mainstream over the weekend flipped their script.

Suddenly, they announced, they are horrified by the violence; they want it to stop, and they want you to know that it’s all Trump’s fault.

That was exactly the wrong response. Public safety is not a plaything for politics. Left and right ought to be working together to make our streets safe.

Ignoring or excusing violence for over three months is highly problematic. Such willful blindness or abetting behavior normalizes violence.

In this case, “Silence is violence.” Silence was a wink and a nod conveying the message that rioting, looting, arson, extortion, smashing windows, destroying businesses, and injuring police and others are OK.

But they are not.

To make matters worse, the left delivered more than the sounds of silence. There were celebrity endorsements, professional sports boycotts, and tons of corporate donations that had more to do with easy virtue-signaling than promoting justice and respect for all.

Absent was any denunciation of the flames consuming block after block of family-owned businesses, or the beatings of innocent bystanders.

Now, however, pollsters report that more and more Americans are disgusted with the violence, leaving leaders on the left less inclined to cheerlead for more unrest in the streets.

Moreover, those on the left have witnessed the mob turn on some of their own. For example, having established the most permissive environment in the nation for rioting, Portland, Oregon, Mayor Ted Wheeler was rewarded by an effort to burn the condo building where he lives.

Reeling from these developments, the left refuses to look in the mirror. Instead, progressives have fallen back on their default explanation for why any and every bad thing happens: Blame Trump.

In this case, that’s like the arsonist blaming the fire department for the fire. But what makes it truly sad is that it accomplishes nothing.

To address the organized criminal violence destroying our neighborhoods, it’s vital that local, state, and federal officials work together. That requires bipartisan cooperation, not partisan finger-pointing.

Unfortunately, Trump can’t wait for the left to come to its senses. As president, he has to act. But he can’t just step in and take over.

For one thing, it’s impractical. Add up every law enforcement officer in the federal workforce, and it’s not much more than the size of the New York City Police Department.

Moreover, many of these federal law enforcement officers have day jobs. They can’t just run off to Seattle and Portland. The federal government was never meant to police a city. That’s why we have local police.

Then there is the National Guard. The guard is good for, well, guarding stuff and providing support to civilian authorities, but is not equipped to police cities.

Members of the Guard also have day jobs. For example, they’re needed to help communities deal with hurricane season. They also have to train and support operational missions for the Defense Department.

In short, the federal government can partner with, but it can’t police, our cities.

The Trump administration recently announced a joint federal investigation is now underway. That is needed. The government should investigate and arrest those crossing state lines to riot or incite rioting, as well as the leaders of enterprises that organize and fund rioting activity.

Fifty years ago, Congress passed the Racketeer Influenced and Corrupt Organization Act to eradicate organized crime. The Justice Department should consider pursuing prosecutions of the rioters’ strategists, ringleaders, and funders under RICO.

To restore peace to our streets, we need to cut off the head of the rioting beast.