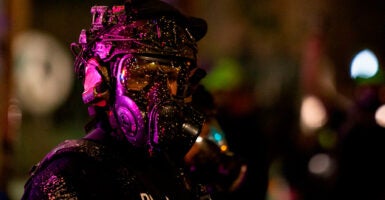 A federal law enforcement agent with a gas mask faces demonstrators during a night of protest against racial injustice, police brutality, and the deployment of federal troops to U.S. cities July 29, 2020, in Portland, Oregon. (Photo: Alisha Jucevic/AFP/Getty Images)

That sounds like an oxymoron, but it’s what we’re seeing in many cities in this season of COVID-19 and protests.

I’m not talking about peaceful protests. Many of those have been conducted successfully since the death of George Floyd. Clearly, huge numbers of Americans have felt it important to march peacefully, in solidarity, against racism.

Soon, however, many cities saw radical political agendas pushed to the fore, including calls to “defund the police.” The Marxist voice of the Black Lives Matters network and violent tactics of groups like Antifa began to piggyback on the peaceful protests and overshadow those other voices.

First they targeted public property. Four persons were charged in federal court for attacking the Andrew Jackson statue in front of the White House. As other federal statues and monuments around the country came under attack, the administration organized task forces to protect them and prosecute the attackers.

The robust federal response seemed to stem the attacks, but a new “tactic” emerged in July. Rioters aimed their sights at cities where state and local officials created a permissive environment for attacks on federal property. In Portland, Oregon, for example, local officials inadequately policed the areas around the federal courthouse, creating the space for organized assaults.

A pattern soon emerged. Portland’s rioters would wait until the daily street protests died down. Then, from midnight to 5 a.m., they would repeatedly assault the courthouse, burning and tearing at it until federal law enforcement officers inside were forced to respond. Then they’d attack the officers. Over 200 federal officers have already been injured, many by high-powered lasers.

Recently, Portland and Oregon officials agreed to police the streets surrounding the courthouse. When they started doing that, the rioters shifted to attacking police precinct buildings and the offices of the Portland Police Association.

This is not just random violence. These developments suggest an organized campaign of criminal action intended to intimidate government officials, degrade law enforcement, destroy public property, and drive a radical political agenda. We should expect these criminal organizations to continue to evolve and change tactics to find new ways to press their agenda forward.

To ensure public safety and provide equal protection under the law, local, state, and federal law enforcement must work together—not just to arrest and prosecute criminal rioters, but to investigate and dismantle the criminal organizations behind them. This effort is crucial to mitigating the attacks and deterring future criminal action.

The criminal organizers will no doubt try to delegitimize the law enforcement response. Thus, law enforcement agencies will have to make a concerted effort to explain clearly that their actions are lawful, appropriate, and focused above all on ensuring public safety and equal protection under the law. Law enforcement must also make clear that it respects the right for lawful, peaceful protests and the exercise of individual civil liberties.

Law enforcement will also need to be wary of new threats. Fringe groups across the political spectrum may conclude that today’s radical agendas and actions are not radical enough. Conversely, some may commit to counter-violence. Local, state, and federal officials must remain vigilant and work to preempt and disrupt violent political action, no matter what the source.

But quelling the violence doesn’t fall solely to law enforcement. Everyone needs to take responsibility for their actions.

Individuals and corporations that moved quickly to provide support and financial assistance to groups when the protests began should take a hard look to see if they aided groups with agendas far more radical or violent than they realized. Greater due diligence is called for.

Whatever anyone’s politics, we should all agree there is no place for organized criminal activities on America’s streets and we should all work together to put an end to this unforgivable violence.