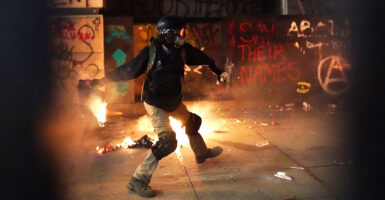 Riots have been ongoing in Portland for 62 consecutive days. What’s really going on? Should federal forces withdraw? Why hasn’t Portland law enforcement been able to get this situation under control? Is it correct to characterize the violence we have seen occurring in Portland as a “myth,” as House Judiciary Committee Chairman Jerry Nadler did this week? Lora Ries, a senior research fellow for homeland security at The Heritage Foundation, joins The Daily Signal Podcast to discuss.

Lora Ries: Thank you for having me.

Del Guidice: Well, it’s great to have you with us. Thanks for making the time. You recently had a Q&A article in The Daily Signal, and you’re talking about what’s happening on the ground in Portland. For our listeners who might not be seeing it on the news, or obviously, who aren’t there, can you tell us what’s going on and bring us up to speed on the latest?

There’s about 9,000 such locations. Portland is no exception. We have a federal courthouse in Portland and the Federal Protective Service has been there since the building was erected, I believe, over 20 years ago.

What started out as peaceful protests in various cities throughout the country following George Floyd’s death has been hijacked by criminal rioters, looters.

It’s really becoming evident that it’s a criminal enterprise and Portland seems to be the hottest spot in the U.S. right now for these criminal rioters. They have been attacking for about 60 days, really 60 nights now, the federal courthouse and the federal officers that are located there, protecting the property and the building.

So the Department of Homeland Security has increased the presence of federal officers there to protect that building and to protect the officers.

The violence continues by the rioters. They are bringing dangerous weapons such as lasers that they’re shooting at the eyes of the officers. They’re using Molotov cocktails, lots of dangerous weapons to assault these officers and damage the building.

Del Guidice: Fox News had reported on Thursday that federal law enforcement had used tear gas, again, on the rioters because they were, again, swarming that courthouse and it’s been, I think, 62 consecutive days of protesting in the midst of this tentative agreement between Oregon officials and the Trump administration for federal law enforcement to pull back. What do you foresee to end up happening here?

Ries: Yesterday, the Department of Homeland Security acting secretary, Chad Wolf, announced a tentative agreement with the governor of Oregon that state police will go into Portland and regain control of the streets and the surrounding areas around the federal courthouse. This can prevent the rioters from staging and planning their nightly attacks.

So if that is successful, and if the governor holds up her end of the bargain, then these riots should stop and some order can be restored to Portland. Ultimately, then DHS can draw down the number of federal officers at that courthouse to the normal numbers that are usually there to protect the building.

Del Guidice: Well, up until this point at least, why haven’t the Portland law enforcement themselves been able to get the situation under control on their own?

Ries: So the Portland law enforcement has their hands tied by the mayor of Portland and the other local politicians. They are turning a blind eye to the rioting and the criminal attacks that are going on. They are allowing this to happen and going even further, they’re blaming the federal agents there and labeling them as the ones who are provoking this situation when it is clearly the criminal rioters who have done this for 60 nights. It’s clear.

If the rioters went home, there wouldn’t be violence. The federal agents would be protecting that building and the situation would restore to order.

Del Guidice: Looking at the past situations, is there any sort of precedent for federal law enforcement to get involved in local policing like this?

Oftentimes they will make arrests either a few blocks away from the courthouse or perhaps hours later when things have settled down a little bit, but to be clear, these rioters are breaking federal laws and federal agents are in their rights to arrest and prosecute them for those crimes.

Del Guidice: We’ve all seen allegations from some about how police in Portland are using unmarked cars and apprehending protesters, and that law enforcement are not properly identified. Is this the case?

With the situation in Portland, we have federal vehicles, law enforcement vehicles, that are sought out and attacked. So it is logical that federal agents would be using unmarked cars in these situations for their own safety.

With respect to identifying themselves, the law enforcement officers have been wearing the same uniforms throughout this entire two-month period in front of the same crowd. They do in fact have patches that include their federal badges that would either represent Customs and Border Protection or Immigration and Customs Enforcement or Federal Protective Service.

Now, they do not have their names written out on their uniforms because, unfortunately, these criminals are doxxing these agents and releasing personal information about them, which puts them and their families in danger. They do, however, have on their uniforms a series of numbers and letters so that they can be identified.

Ries: It’s absolutely not a myth. For this type of consistent and nightly series of attacks to go on is anything but a myth. This is real. Agents have been injured. Property has been damaged and destroyed.

Jerry Nadler’s comment is indicative of politicians on the left, at all levels, whether it’s in Portland or in Oregon or at federal government, ignoring what is really going on and trying to portray the federal police as the ones provoking the situation and that’s exactly backward.

These writers are part of a criminal enterprise that include organizations like Black Lives Matter Global Network [Foundation] or Antifa. These politicians are in line with some of these groups and are trying to portray the situation in a false light.

The media is complicit in this because on the one hand, you’ve got the media labeling these dangerous riots as merely peaceful protests, but at the same time, the media is also showing video of occasional, when necessary, federal agents using riot tactics to get control over the situation.

The media is playing that nonstop to make President [Donald] Trump’s America appear that it is out of control and that police across the board are racist. So it’s a concerted effort and it’s involves many parties, politicians, and media.

Del Guidice: Given that, what would you say, or what do you think, the message to people like Jerry Nadler should be, who make comments like these, that when they’re investigated and when people are on the ground there reporting on what’s going on, like, there’s a very different reality?

Ries: So I think the message should be to Americans that they are not getting the truth from either their political leadership or the mainstream media.

There needs to be a concerted communications effort from law enforcement, from political leaders who see what’s really going on so that they can counter this false narrative by Jerry Nadler and others, so that Americans know the truth and help bring a stop to the riots, not just in Portland, but in cities across the U.S.

Del Guidice: You mentioned, Lora, how so much of this either has been underreported or just reported in not a correct light. What do you think, looking at this whole situation, has been the most underreported aspect about what’s been going on in Portland?

Del Guidice: As we look forward into the future, what do you think should be the solution to solve the ongoing, basically, crisis that is happening in Portland right now?

Ries: I think it’s a few things. First of all, the politicians and law enforcement need to protect their citizens and their property and the businesses. In addition to that, the criminals who are committing these dangerous acts need to be investigated and prosecuted.

Unfortunately, there are some rogue prosecutors in district attorney’s offices throughout the country funded by George Soros and others who don’t believe in prosecuting some of these crimes. So these rioters will get arrested and again, and then just released back onto the street because these rogue prosecutors refuse to prosecute them.

So the bad actors—from the thugs on the street throwing the Molotov cocktails, all the way up to the leaders of these organizations and the funders—need to be investigated and prosecuted for the crimes that they’re committing.

Then it’s going to involve some recovery for the businesses and the cities that have been destroyed and there needs to be some rebuilding going on of businesses and in people’s lives. And coming on the heels of stay-at-home orders due to COVID, … it really compounds the situation and how some of these communities have been hurt.

Unfortunately, it’s typically the poor communities or minority businesses that are affected the most.

Then finally, there needs to be a real communication effort by objective media and law enforcement and politicians who see what’s really happening here so that they can counter the narrative from the left.

Del Guidice: Lastly, Lora, this is somewhat of a hypothetical, but just looking at different possibilities that are out there, what do you think would be the worst-case scenario for how this ends if it’s not ended in a way that respects the rule of law?

Ries: That an agent is killed, and also it’s pretty clear that this criminal enterprise is intent on carrying this out through the election so that they provoke Americans to vote how they want them to vote. So the longer this goes on, it just destroys more property, more businesses, more livelihoods.

Del Guidice: Lora, thank you so much for joining us on The Daily Signal Podcast and really talking us through what’s been happening in Portland. We appreciate having you.

Ries: Thank you for having me.