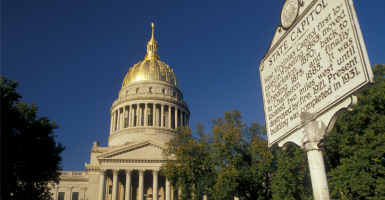 "Members of both chambers of the West Virginia legislature set the state on the course for job-growth by finalizing passage of right-to-work,” Americans for Prosperity State Director Jason Huffman said. (Photo: Andre Jenny Stock Connection Worldwide/Newscom)

Tomblin, a Democrat, vetoed the measure Thursday after expressing concern that it would not help stimulate the economy as some claimed. The policy outlaws mandatory union dues or fees as a condition of employment. Republicans argued that it could help reverse decades of bad economic policies enacted under previous Democratic control.

Republicans wasted no time and, in less than a day, voted to override the veto, making West Virginia the 26th right-to-work state.

“With the House of Delegates and Senate overriding Gov. Tomblin’s veto of the Right to Work Bill, West Virginia is now America’s 26th Right to Work state,” National Right to Work Committee President Mark Mix said in a statement to The Daily Caller News Foundation. “Now, more than half of the states have enacted Right to Work laws to protect workers’ fundamental right to freedom of association.”

The measure was introduced Jan. 13 on the first day of the 60-day legislative session. Republicans held a slight majority in the legislature, allowing them to pass it despite adamant opposition from Democrats. Critics claimed that the policy makes it much more difficult for workers to advocate for themselves, while supporters noted that it simply gives workers a choice.

“Today members of both chambers of the West Virginia legislature set the state on the course for job-growth by finalizing passage of right-to-work,” Americans for Prosperity State Director Jason Huffman said in a statement to The DCNF. “We applaud their swift response to the governor’s veto and we are excited for the opportunities that have been created for the Mountain State.”

The state law gave supporters just enough of an advantage to override the veto. In a lot of states, a supermajority of two-thirds is required to reverse a veto. In West Virginia, supporters need only a simple majority because the bill was not tied to the budget.

West Virginia is the fourth state in the past four years to outlaw forced unionism—Wisconsin was the last, enacting the law in 2015.

Originally published in The Daily Caller.