‘They Nearly Killed Me’: Journalist Andy Ngo Testifies Before Congress on Antifa Violence During Portland Protests 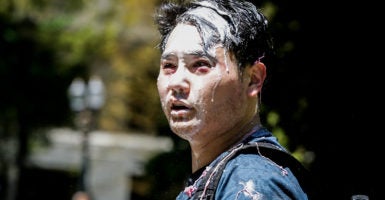 Journalist Andy Ngo shared his personal experience with Antifa violence and his firsthand knowledge of its strategies during a congressional hearing Monday.

Ngo testified in a virtual briefing called “The First Amendment Under Attack: Examining Government Violence Against Peaceful Civil Rights Protesters and the Journalists Covering Them” before the House Committee on Oversight and Reform Subcommittee on Civil Rights and Civil Liberties June 29, according to his written testimony.

“For years, I have been the victim of hundreds of threats by Antifa extremists,” Ngo said. “They’ve threatened to kill me, they spread lies about me being a fascist, a neo-Nazi, even a terrorist. They’ve shown up to my family’s home in the middle of the night, and they nearly killed me when they beat me in broad daylight within view of the police in the middle of downtown Portland last year.”

Violence against journalists is frequently committed by protesters, rather than law enforcement officers, Ngo said in his testimony.

“There are endless examples of public servants harming the very people they’re meant to serve—but it is an incomplete picture to only focus on injuries perpetrated by law enforcement during the past month of riots,” Ngo said.

Protests and riots broke out recently across the country following the death of George Floyd, who died after a former Minneapolis police officer knelt on his neck for nearly nine minutes, video of his arrest showed. The protests turned to violent demonstrations in some areas, leading to the destruction of buildings, statues, and other landmarks.

Ngo claimed in his testimony that the destruction done to property and injuries sustained by individuals during recent protests is not a result of “over-policing,” but caused by “under-policing.”

“America is experiencing the consequences of police in retreat because of biased media narratives and poor leadership,” Ngo said. “This has allowed violent extremists to cloak themselves under the banner of ‘peaceful protest’ to carry out widespread arson, shootings, looting, and property destruction.”

Ngo said that though the First Amendment is important, protests needed to obey the law to avoid “anarchy, violence, and death,” according to his testimony.

“George Floyd deserves justice. But so do countless Americans victimized by the riots,” Ngo said.