Liberal Media Alternate Between Denying and Excusing Rioters and Looters 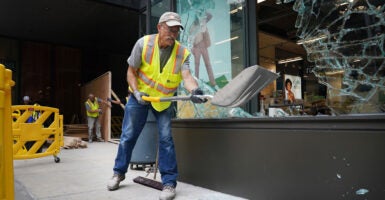 Crews clean up broken glass and board up broken windows at the Nordstrom Rack store at Nicollet Mall on Aug. 27 in Minneapolis after rioting and looting. (Photo: Anthony Souffle/Star Tribune/Getty Images)

There’s a reason Americans have such little faith in the news media in 2020—and the problem isn’t President Donald Trump.

Rioting, vandalism, arson, and looting have become commonplace, but media outlets are too busy spinning narratives, rather than pursuing the truth of what is happening.

The most common tack thus far is for the media to simply deny that violence and destruction is taking place at all. A tweet by a Washington Post journalist was a good illustration, showing the National Mall in Washington, D.C., appearing to be peaceful during the day—despite the fact that clashes between police and rioters had taken place in the city’s downtown shortly before.

That has led to the summer of 2020 trend of journalists saying that a protest is “mostly peaceful” on camera even as a fire rages in the background.

The most recent example was a ridiculous CNN chyron proclaiming that in Kenosha, Wisconsin, there were “fiery, but mostly peaceful protests after police shooting.”

The reality is, it’s getting hard to ignore what’s happening in major cities across the country, where protests have morphed into looting and rioting and where mayors and governors seem to be unable or unwilling to regain control of cities.

Many of the protesters and rioters have been openly calling for violence, and in some cases, the destruction of the United States.

“Death to America” was chanted by the mob as they marched through Oakland, California starting fires and vandalizing businesses
pic.twitter.com/8JUAPPYSox

A BLM leader is encouraging this crowd of protesters to fight the DC cops on the frontlines. Saying he’s “ready to put them in their graves” – this may lead to another violent night in DC… pic.twitter.com/0LXTR69c2P

While some media outlets are doing their best to spin the riots as “mostly peaceful,” others are now giving coverage to those who think that the riots are actually a good thing.

In May, Northwestern University journalism professor Steven Thrasher wrote for Slate that destruction of property was a “reasonable response to the crisis of policing.”

That may seem extreme enough, but now one writer has gone down the path of a full-blown defense of looting.

Vicky Osterweil, a trans woman described as a “writer, editor, and agitator, and a regular contributor to The New Inquiry,” recently wrote a book titled “In Defense of Looting: A Riotous History of Uncivil Actions.”

The book has a crowbar on the cover.

This radical defense of looting and property destruction was given coverage by major media websites, including HuffPost and National Public Radio, which receives taxpayer funding.

In the NPR interview of Osterweil, journalist Natalie Escobar began by writing, “In the past months of demonstrations for Black lives, there has been a lot of hand-wringing about looting.”

You can see where this is going.

Osterweil explained in the interview that looting is the “mass expropriation of property, mass shoplifting during a moment of upheaval or riot,” adding: “That’s the thing I’m defending.”

Among the positive aspects of looting, according to Osterweil, is that “it gets people what they need for free immediately, which means that they are capable of living and reproducing their lives without having to rely on jobs or a wage.”

But it gets even better.

“Looting strikes at the heart of property, of whiteness, and of the police,” Osterweil wrote. “It gets to the very root of the way those three things are interconnected. And also it provides people with an imaginative sense of freedom and pleasure, and helps them imagine a world that could be. And I think that’s a part of it that doesn’t really get talked about—that riots and looting are experienced as sort of joyous and liberatory.”

When Escobar asked about the destruction of businesses, many of which are owned by immigrants and minorities, and how it destroys people’s livelihoods, Osterweil dismissed that as an illegitimate concern.

Osterweil argues, essentially, that being against looting is somehow racist and demonstrates “anti-blackness and contempt for poor people who want to live a better life.”

That ignores that riots, looting, and property destruction in the 1960s and 1970s ravaged many black-majority neighborhoods, leaving them dysfunctional and economically depressed for a generation.

It’s not necessarily surprising that a few radical intellectuals are advocating violence. What’s shocking is that these arguments and ideas are treated with seriousness by major mainstream media outlets that have significant reach and influence.

As James Freeman at The Wall Street Journal wrote, the truly shocking part of Osterweil’s interview is that it “is not posting to an obscure internet chat site, but a massive taxpayer-funded media outlet.”

Maybe it’s time to take another look at the millions of dollars of taxpayer money the federal government sends NPR every year.

This sort of coverage really drives home the idea—as I wrote about previously—that it’s actually major mainstream media outlets that are driving the sudden turn to “radical wokeness” in American society.

Giving air to those preaching violence—because that’s ultimately what looting and rioting is, despite whatever defenses some may put forth—is just the next step in American media discrediting themselves and losing the faith of the public.