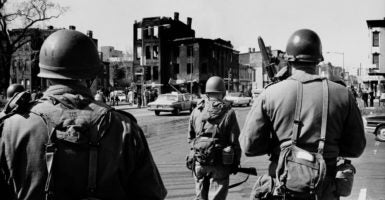 The many U.S. cities currently gripped by civil unrest and violence in the wake of the May 25 death of a black man, George Floyd, in police custody in Minneapolis call to mind the rioting in two other Midwestern cities, Detroit and Chicago, in the late 1960s.

The years 1967 and 1968 were among the most tumultuous in American history.

Even before the rioting of 1968 following the slaying of civil rights leader Martin Luther King Jr. and during that year’s Democratic National Convention, tensions had been building. A riot broke out in July 1967 in Detroit after a police raid on an illegal, after-hours nightclub.

Violence erupted across the city, and then-Michigan Gov. George Romney—the father of Sen. Mitt Romney, R-Utah—had to call in the National Guard to aid an overwhelmed police force.

For those familiar with classic rock music, the Detroit riot was immortalized at the time in a controversial Gordon Lightfoot song, “Black Day in July.”

Nearly 50 people were killed in the mayhem, more than 1,000 were injured, and property damage across the city was immense.

That had been the worst of what were several years of riots and unrest, as Barry Latzer, a professor emeritus at New York’s John Jay College of Criminal Justice, explained in The Wall Street Journal.

But in 1968 the unrest reached its peak.

On April 4 of that year, King was assassinated by James Earl Ray while standing on a balcony of a hotel in Memphis, Tennessee. The assassination led to riots in cities across the country.

The riots that took place in Washington, D.C., were among the worst. They began in the Northwest section of the city, at the intersection of 14th and U streets, and ravaged what had been at the time a mostly black and prosperous neighborhood.

The rioting got so bad that President Lyndon Johnson called in the military to intervene. More than 10,000 troops came to the city. According to WTOP, it was the largest occupation of an American city since the Civil War.

It took about a week to restore order to the city, but by then, much damage had been done. Large parts of the city had been burned, about 8,000 people had been arrested and 18 were killed.

The devastation from the riots in the District of Columbia was so severe that large parts of the city didn’t even begin to recover until the late 1990s and early 2000s.

The riots that took place in Chicago were likewise catastrophic.

“Throughout the weekend, police in the Lawndale and Austin neighborhoods on the West Side and in the Woodlawn neighborhood on the South Side rushed from emergency call to emergency call as mobs of men, women, and children moved from store to store, breaking plate-glass windows and taking what they found,” according to James Coates, writing for the Chicago Tribune, adding:

Television sets, clothing, food, and liquor were carted away from largely white-owned businesses that lined Madison Street and Homan and Kedzie Avenues. Fires blazed out of control across the West Side.

As with Washington, D.C., the National Guard was called in to quell the violence.

“No official death toll was given for the tragedy, although published accounts say nine to 11 people died during the rioting,” according to the Chicago Tribune:

Three hundred fifty people were arrested for looting, and 162 buildings were destroyed by arson. Bulldozers moved in to clean up after the rioters, leaving behind vacant lots that remained empty three decades later.

Even after order was restored, the city faced numerous problems, including food shortages. Riots broke out again in Chicago later that year during the Democratic National Convention. Anti-Vietnam War protesters with Students for a Democratic Society and other groups—many of them burning American flags and waving the flag of the Viet Cong—clashed with police. Hundreds were injured in the mayhem that ensued.

In the 1960s, just as today, much of the rioting was concentrated in a few places.

“A seeming oddity of the disturbances of the late ’60s and early ’70s is that they failed to materialize in many cities,” Latzer wrote. “An analysis of 673 municipalities with populations over 25,000 found that 75% of them experienced no riots. Even within riot-torn cities, it is estimated that 85% or more of the black population took no part in them.”

An important—if largely unreported—takeaway from the aftermath of the 1960s riots is that the violence and destruction set the communities living in those burned-out neighborhoods back for generations as many businesses never returned and inner cities decayed.

That’s something to keep in mind. If the current looting and arson continue, how long will it take for the cities to recover this time?