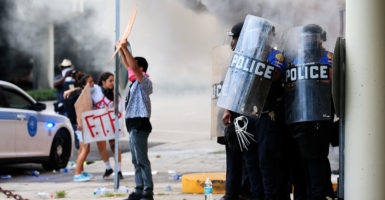 Police in riot gear use tear gas and other means of crowd control in Miami on May 30 as they blockade a station's parking garage during a rally in response to the police killing George Floyd. (Photo: Cliff Hawkins/Getty Images)

The orchestrated violence roiling an increasing number of American cities is cause for considerable concern. There are myriad explanations being offered by the media and pundits.

But the voices that are largely silent during this time of chaos are the very people who are a central factor in the lawlessness and violence that is spreading.

Our societal problems are being exponentially magnified by the decline in the quality of personnel who advance to commanding, decision-making roles in police departments and mayoral offices. This impotence and incompetence is also on full display among the elected officials serving in the House of Representatives and the Senate.

The profound lack of effectiveness of these self-important leaders in federal, state, and municipal governments is now on display. This disappointing reality is the result of decades of decline in the abilities of people who are elected to serve the public but seem to spend far more time preening for cameras and promoting themselves to ever-higher levels in terms of title, compensation, and power.

There is almost total silence from the elected leadership in Washington of late. Few state and municipal figures, with the exception of Atlanta’s mayor, Keisha Bottom, have dared to venture before a microphone during the past several months of the pandemic.

And that silence has been magnified in the wake of the murder of George Floyd being carried out at the hands of a uniformed police officer in broad daylight as phone cameras recorded every moment of the horror.

Few people in America have seen someone die right before their eyes. It is a thing that can change you—that moment when the life and spirit of someone you know and love, or even that of a complete stranger, leaves their body.

The videos showcasing the execution of Floyd put that moment on full display. A life was needlessly ended by an act of violence while powerless bystanders pleaded with police officers to act with decency and humanity.

The arrogance and cruelty demonstrated by an officer sworn to serve and protect the very people he was crushing sickened the nation and shocked our conscience.

Americans have been jolted awake and are focused now on the grave injustices that have become institutionalized. And many are increasingly frightened by a series of events that seem to be spiraling out of control.

Sadly, the voices of those who are motivated not by justice but rather the quest for destruction, chaos, and a collapse of our democratic system seem to be growing louder and more active than those of the huge numbers of Americans who desire constructive, systemic change in the way we are governed.

Bear in mind that some who are looting and creating mayhem are bands of opportunists and low-life thieves. But many others belong to organizations that are well-funded and have plans of action. Such groups, including Antifa, plan and direct acts that require logistics, funding, equipment, weapons, and the moving of tools of destruction to various cities in an attempt to foment unrest.

The breathtaking incompetence of the FBI and other federal agencies, coupled with a lack of resources and effective tools and tactics that should be within every police department, are today visible to all. This inability to adequately protect businesses and law-abiding citizens from violence should enrage every American.

Antifa is just one of the more visible operators being blamed for this chaos. But the truth is that we have a much larger, deeper, and more chilling problem on our hands. There is no doubt in my mind that foreign intelligence services are orbiting in or around this issue and contributing to the violence.

They see an opportunity to further destabilize the United States. They want to roll back our influence. Unable to defeat us militarily, they want to strike at us economically and to chip away at our society, causing the population to lose confidence and trust in our system and structure of government.

We must not play into their hands. Pursuing justice in the wake of Floyd’s murder is a noble aim. Creating systemic changes and identifying competent leaders who can improve our society is the right thing to do.

Allowing ourselves to devolve into chaos, violence, wanton destruction, and anarchy plays right into the hands of our nation’s enemies. Americans are better than that.