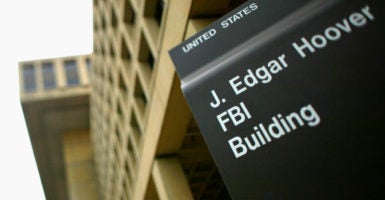 While there may well be a need for Congress to take action to address the very real misuses of FISA authorities by a select few former or current FBI officials in recent years, changing core authorities that protect the safety of our citizens—or leaving them expired—is absolutely the wrong approach. (Photo: Brooks Kraft/Corbis/Getty Images)

As former national security officials, we write to express our deep concerns about the current debate over suggested amendments to the Foreign Intelligence Surveillance Act.

Contrary to popular narratives making the rounds on the extremes of both sides of the political aisle, the fact is that the Foreign Intelligence Surveillance Act (FISA) is a critical national security authority that has kept us safe from terrorist attacks for the past two decades.

As such, maintaining the core authorities it provides is crucial to the security of our nation and its people. Congress should not adopt amendments that would fundamentally undermine those authorities.

We believe that it is unconscionable—and a very real threat to the daily lives of all Americans—that we are currently operating under authorities that date back to before the terrorist attacks of Sept. 11, 2001.

Of the three expired authorities, two—pertaining to “lone wolf” suspects and to roving wiretaps—are largely uncontroversial and have been repeatedly reauthorized by Congress over the past 18 years.

As for the third authority—which authorizes investigators to collect phone and other business records—it’s hard to see any basis to object to it.

As such, there’s no reason these authorities cannot simply be reauthorized now—and ideally made permanent—as the current administration originally requested.

While there may well be a need for Congress to take action to address the very real misuses of FISA authorities by a select few former or current FBI officials in recent years, changing core authorities that protect the safety of our citizens—or leaving them expired—is absolutely the wrong approach.

Similarly, making changes that have little real benefit for the American public—who want the protection of these national security authorities, while also maintaining appropriate safeguards for their privacy and civil liberties—is also unwise.

Instead of continuing to pursue the current course, which has left us exposed to serious threats for months, Congress ought to act now to reauthorize the expired authorities and then separately take the time necessary to fully consider limited changes—such as perhaps making certain FBI internal procedures statutorily required—that are directed at actual problems that have taken place in recent years.

In addition, Congress should focus its efforts on conducting strong oversight of existing authorities and holding the FBI and Justice Department responsible for disciplining—and, where appropriate, prosecuting—those involved in prior abuses.

That approach, in our view, is vastly better than continued delay and any legislative approach that would take out, brick by brick, the key authorities that are the bedrock of the American public’s protection against terrorists, spies, and other agents of a foreign power who would seek to destroy our way of life.

To be clear, we share Congress’ deep and abiding concern about the now well-documented failures that took place within the FBI in recent years. And we believe that strong oversight is critical to addressing those issues and that changes to the law may very well be necessary.

At the same time, however, we reject the notion that reconsidering the core basis of the laws that have kept our nation safe, or putting in new roadblocks to effective surveillance with little real benefit to those we seek to protect, is the right approach.

To that end, we support the administration’s original request that Congress permanently reauthorize the three expired authorities. We also recommend that Congress move expeditiously to do so while also separately considering other potential measures—such as those described above—to address the failures that have been identified in recent years.

A signature has been added to this piece and one affiliation changed since initial publication.