The Controlled Burn Rages Out of Control 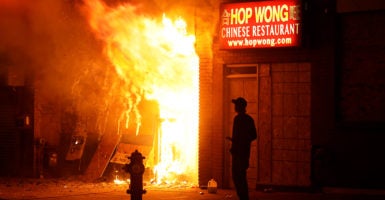 Despite a curfew, protests and looting went all throughout the night in various parts of the city of Minneapolis May 29, 2020. There were too many fires for firemen to put out. (Photo: Carolyn Cole/Los Angeles Times/Getty Images)

In the wake of riots that have spread across America, leaving shattered businesses and wounded communities in their wake, it feels as though our nation is collapsing around us.

That’s bizarre, considering that virtually all Americans agree with the following two propositions: first, that it is evil for a police officer to place his knee on the neck of a prone suspect struggling to breathe for eight long minutes; second, that breaking store windows; stealing televisions and shoes; beating business owners; and attacking police officers is wrong.

That seeming unanimity should mean unity in the face of police brutality and rioting and looting.

It doesn’t because members of our political class have decided that instead of rallying against obvious evil, Americans must be categorized as enlightened or benighted based on their answer to one question: Was America and is America rooted in racism and bigotry?

This is a nonsensical and dangerous game. But it’s a game pressed forward by the most powerful messaging institutions in our society: our media, who award Pulitzer Prizes to faux history like the 1619 Project, which argues that every American institution has been fatally corrupted by America’s original sin, slavery, and that every inequality of today can find its root in inequities of the past; our celebrities, who proudly proclaim that rights to free speech, property ownership, and due process are merely facades for the continuing and malign maintenance of structural inequalities; and too many of our politicians, who casually attribute every instance of police brutality to deep-seated American racism.

These are lies. America’s history is replete with racism and oppression, but that’s because America didn’t hold true to her founding ideals; America’s philosophy is good and true, and her flaws are thanks to her failures to follow that philosophy.

Declaring America’s most fundamental structures corrupt and cancer-ridden is deeply dangerous. Once a structure has been condemned, its foundations declared unstable, it can only be destroyed. There is no way to argue that fealty to a particular political program inside that supposedly corrupt structure can fix the problem.

Former President Barack Obama, who declares that discrimination exists in “almost every institution of our lives,” and that “the legacy of slavery, Jim Crow … that’s still part of our DNA that’s passed on,” says that voting for local officials is the solution to police brutality and individual instances of racism.

Somehow, so long as we vote for the same Democratic politicians who have governed nearly every major American city for decades, America’s founding sins can be extirpated. Is anyone expected to believe this? Our elites cannot set fire to the fundamentals of America and then hope to contain that fire to occasional trips to the voting booth.

So Americans are left with a choice. We can either think of one another with charity and accuracy, acknowledging the sins of America’s past while recognizing that America remains a beacon of freedom and decency, or we can continue to follow the path of those who would tear us apart. To follow the latter course isn’t sensitive or moral. It places the very existence of our common republic at risk.