How the Media Deploy a ‘Distraction’ Framework 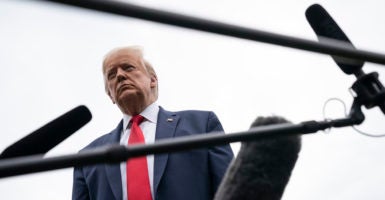 “I think it’s just typical President Trump,” says House Speaker Nancy Pelosi. “A distraction. More than 100,000 people have died from the coronavirus." Pictured: President Donald Trump speaks to reporters on his way to Marine One on the South Lawn of the White House on May 14. Trump is traveling to Allentown, Pennsylvania, to visit Owens & Minor, a medical equipment distributor. (Photo: Drew Angerer/Getty Images)

Tom Bevan is the co-founder and president of RealClearPolitics.

I’ve been in the news business for over 20 years now, and among the many things I’ve learned about how the media complex operates is this: One of the favorite tricks journalists and politicians use to control the focus of viewers and push the media’s preferred narrative is to label other stories as “distractions.”

This is especially true when it comes to President Donald Trump.

In the recent past, most mainstream media outlets have been obsessed with the pandemic, and his leadership during this crisis. That is certainly understandable. In some ways, it’s the biggest news story in a generation, with a large death toll and global implications about governmental control over the economy, international relations, and the very idea of life-sustaining social interactions between human beings.

But it’s not the only story. And this is where the sleight of hand comes in.

Among Democrats and many liberal journalists, it is an article of faith that Trump’s handling of the pandemic has been a disaster. Keeping the focus on Trump’s failures has become a priority. In this framework, anything the president does or says that is not related to the pandemic is labeled a “distraction.”

“I think it’s just typical President Trump,” said the House speaker. “A distraction. More than 100,000 people have died from the coronavirus. This administration has been a failure in terms of what we’re doing, testing, tracing, treating, and isolating people. The president has been a terrible example of not wearing a mask, and belittling those who do. So anything he does is a distraction from the problem at hand.”

Just a few weeks ago, any discussion of the troubling Justice Department treatment of Lt. Gen. Michael Flynn was declared a “distraction” by a flurry of reporters and media outlets. CNN has been particularly fond of the “distraction” theme in recent weeks, as you can see from the following headlines:

“10 Things Trump Would Like to Distract You From Focusing On”

“Trump Goes on Wild Tweetstorm to Distract From Fauci Testimony”

Notice that when Trump tweets or comments about a subject or story that the media approves of, such as he did with the George Floyd case Thursday, it’s never labeled a distraction. Only stories on subjects in which the press disagrees with the administration earn the “distraction” distinction.

If this feels familiar, that’s because it’s been going on since the day Trump took office. From the beginning of his presidency, as the Russia collusion stories began peppering the landscape, journalists and Democrats used the technique to make sure audiences stayed focused on what they believed was the most important story in history: the Trump campaign’s supposed collusion with Vladimir Putin.

Over the last three years media outlets have dismissed dozens of presidential statements and initiatives as efforts by Trump to distract the public from the Russia collusion story or special prosecutor Robert Mueller’s investigation, including tweeting about Iran, pulling John Brennan’s security clearance, starting a cold war with China, meeting with Kim Jong Un, and even slapping tariffs on Mexico.

The collusion story turned out to be false. So what exactly was Trump trying to distract you from? The answer is he wasn’t.

Donald Trump is, by his very nature, an outrageous, impulsive, torrential news-making machine. He seemingly tweets about every thought that enters his head, from consequential policy pronouncements to strange conspiracy theories and petty schoolyard taunts.

But it’s up to you, the citizens and voters, and not the media gatekeepers, to decide what is a “distraction” and what isn’t.