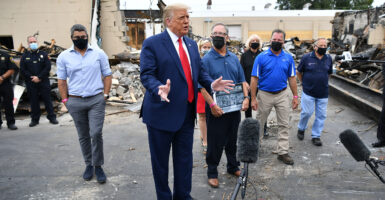 President Donald Trump speaks to members of the media on Sept. 1 as he tours an area of Kenosha, Wisconsin, affected by civil unrest. (Photo: Mandel Ngan/Agence France-Presse/Getty Images)

Two of Riki Tagliapietra’s downtown businesses in Kenosha, Wisconsin, were vandalized, but the vice president of the Grease & Honey Restaurant Group in Kenosha is helping other business owners rebuild after rioting there.

Tagliapietra was part of a roundtable discussion Tuesday in Kenosha that included President Donald Trump and other federal officials, along with Kenosha government and community leaders, and clergy members. He represented the Downtown Kenosha Inc. nonprofit economic development organization, which is leading the rebuilding effort for downtown and uptown alike.

“It has been a struggle, but our community has been really incredible,” Tagliapietra said. “More people have come to help than we know what to do with. But right now, what we need is financial support. Loss of business and loss of property is staggering at this point.”

The city of about 100,000 people in southeastern Wisconsin about 65 miles north of Chicago descended like many other larger cities into looting and arson after police shot Jacob Blake, an African American, in the back seven times. Local authorities as well as the Justice Department are reviewing the matter.

“We are going to get Kenosha back in shape, and we’ll get it very quickly,” Trump said at the roundtable discussion.

Trump announced $1 million in federal aid for the Kenosha Police Department, $4 million to help small businesses rebuild, and $42 million for public safety across the state of Wisconsin, including for police and prosecutors.

Wisconsin Gov. Tony Evers agreed to call up the state’s National Guard to quell the rioting in the city.

“Bill, I know you’re also participating,” the president added, referring to Attorney General Bill Barr, who had accompanied him to Kenosha. “It’s under your local investigation group, unit. I hope they come up with the right answer. It’s a complicated subject, to be honest with you. I didn’t get to speak to the mother [of Blake]. I hear she is a fine woman. I’ve heard that from the pastor.”

Trump told reporters on Monday that Blake’s family wanted lawyers present for a discussion with the president, which the president said he thought was unnecessary. But he talked to the family’s pastors, the Revs. James Ward and Sharon Ward of Insight Church, both of whom attended Tuesday’s discussion.

James Ward led the gathering in prayer midway through the meeting. He added, “We have to condemn the dangerous anti-police rhetoric.”

He noted the challenges police officers face. “You have some bad apples … but you have a quarter of a second to make a decision,” he said.

Barr explained the riots would not affect the federal probe into the Blake shooting.

“Like all procedures and processes in our country, we do it under due process, and we try to reach a dispassionate, reasoned decision based on an analysis of the situation,” Barr said. “We do not allow judgments to be reached because of mob violence. We do not allow mob violence in this country to make our decisions over the fate of individuals when their actions are challenged.”

Kenosha Police Chief Daniel Miskinis noted the city is relatively small and that it needed the National Guard assistance.

“What you also have here is an attack on small-town America. The tactics that are being used across this nation to attack law enforcement are warfare-type tactics,” Miskinis said. “We still use restraint and function within our rules. Those two together, there is not a tit-for-tat. Those aren’t equal.”

Trump said that Antifa, a domestic far-left militant group, was a big part of the problem, which Trump seemed to think the media and the left do not want to acknowledge.