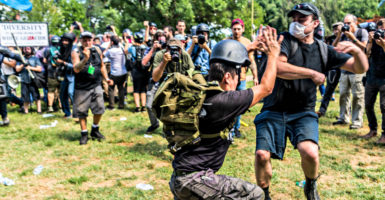 When self-described anti-fascists showed up in force Saturday to oppose a rally of white supremacists in Charlottesville, Virginia, some of them turned violent, according to media reports and eyewitness accounts.

President Donald Trump did not specify radicals who operate under the banner of Antifa, an abbreviation for anti-fascist or anti-fascist action, when he said Tuesday that “both sides” bore responsibility for the violence and bloodshed that left three dead and dozens injured.

“They are not legitimate actors in the democratic process.”–@vadum on Antifa

It is hard to know at this juncture how many of the hundreds of counterprotesters considered themselves affiliated with Antifa. Nor is it clear how many of them were among those who squared off against the white supremacists marching in downtown Charlottesville, trading punches and blows, some with lengths of wood.

The full facts await the findings of a Justice Department investigation of the Charlottesville violence announced by Attorney General Jeff Sessions.

“Antifa is a coalition of hyperviolent activists who are far-left anarchists or communists,” said Matthew Vadum, senior vice president at the Washington-based Capital Research Center. “They could be considered domestic terrorists. They are not legitimate actors in the democratic process.”

Fox News Channel’s Doug McKelway, on the scene in Charlottesville, was among reporters who described individuals in clashing groups wearing helmets and padded clothes, carrying shields, and brandishing lengths of wood.

Initially, the network of radical activists did not attract as much media attention as the white nationalists and neo-Nazis they were confronting, but this has begun to change.

The liberal media outlet Slate, however, reported that clergy and other peaceful protesters of the white supremacists credited Antifa activists with trying to protect them from violence.

There is no cohesive, centralized structure to Antifa. Instead, it appears to be set up as a network of anarchists, communists, and socialists who say they are opposed to “racism, sexism, homophobia, and capitalism” and take inspiration from a European movement in the 1930s called Anti-Fascist Action, as The Economist explains in a brief profile:

Antifa groups are not as widespread as they might seem. Their lack of coordination and endorsement of violence hinders their appeal as a mass movement. In America, their ongoing guerrilla war with the alt-right has helped bring more publicity to white supremacists and nationalists while doing little to advance their (somewhat unclear) cause.

Prior to its clashes with white supremacists in Virginia, Antifa—often rendered in lowercase as antifa–gained some notoriety June 4 after confronting Trump supporters in Portland, Oregon, which resulted in violent clashes.

Antifa allegedly had a hand in threatening violence against Portland’s 82nd Avenue of Roses Business Association if the business group allowed the Multnomah County Republican Party to participate in its annual Rose Festival. The business group canceled the event.

Arthur Milikh, associate director of the B. Kenneth Simon Center for Principles and Politics at The Heritage Foundation, told The Daily Signal in an interview that Antifa has avoided spelling out its positions and goals in an effort to evade scrutiny.

“They have been very careful to avoid laying out what precisely they desire to obtain, or what fascism means”–@Heritage’s Arthur Milikh on Antifa.

“They have been very careful to avoid laying out what precisely they desire to obtain, or what fascism means,” Milikh said. “Whatever one may think of President Trump, his rhetoric, or his policies, it’s absurd to suggest that he intends to or could dissolve Congress, cancel elections, shred the Constitution, and name himself dictator, as a fascist would.”

Writing in The Atlantic, Peter Beinart—who has written before about Antifa in an essay titled “The Rise of the Violent Left”—suggests that adherents are hard to pin down, noting:

Antifa activists are sincere. They genuinely believe that their actions protect vulnerable people from harm. Cornel West claims they did so in Charlottesville. But for all of Antifa’s supposed anti-authoritarianism, there’s something fundamentally authoritarian about its claim that its activists—who no one elected—can decide whose views are too odious to be publicly expressed. That kind of undemocratic, illegitimate power corrupts.

Beinart points to Portland’s Rose Festival confrontation as an example. Assailants dressed in black appear to wrest a Confederate flag from an older man after knocking him down while police officers watch Saturday in Charlottesville, Virginia. (Photo: Michael Nigro/Sipa USA/Newscom)

Antifa has been connected with other far-left organizations such as one with the unwieldy name of Coalition to Defend Affirmative Action, Integration, & Immigrant Rights and Fight for Equality by Any Means Necessary, or BAMN.

Antifa activists sometimes stand out from the pack by dressing “head to toe” in black, a style and tactic known as “Black Bloc.”

Antifa has operated with a heightened profile since Trump’s election. During official festivities surrounding Inauguration Day in Washington, Antifa was part of anti-Trump protests and engaged in destruction of property, The Washington Post reported.

In February, Antifa activists took part in fiery protests at and around the University of California, Berkeley.

>>> In Photos, the Latest Example of Liberal ‘Tolerance’

Antifa joined with others to aggressively oppose a scheduled appearance at UC Berkeley by Milo Yiannopoulos, a British-born libertarian commentator, making Antifa part of the movement to suppress free speech on college campuses.

Black-clad protesters wearing masks threw commercial-grade fireworks and rocks at police. Some even hurled Molotov cocktails that ignited fires. They also smashed windows of the student union center on the Berkeley campus where the Yiannopoulos event was to be held.

UC Berkeley, which reported $100,000 in damages, canceled that speech.

‘Stir Up the Debate’

In many respects, Antifa appears to exist mostly as a conduit for social media organizing strategies, as opposed to a single organization. Using Facebook, Twitter, and other tools, the network attracts participants in its activities, including its role in the Berkeley protest and the counterprotest in Charlottesville.

The biggest impact of American Antifa groups has been to stir up the debate on free speech through their insistence on preventing so-called fascists from expressing themselves, such as at Berkeley in February, where Antifa groups staged violent protests against Milo Yiannopoulos, an alt-right provocateur. Shutting down speech is hardly anti-fascist.

Coverage of Antifa appears to focus narrowly on its opposition to white supremacist and neo-Nazi organizations, but a significant number of Antifa members appear to regard Trump and the Republican Party as fascist and racist.

A growing number of videos supporting and attacking Antifa pop up on YouTube and other social media outlets, including this example, a 10-minute video in which two masked young members call themselves socialists.

In an Aug. 8 post about Antifa on the Capital Research Center’s website, four days before the violence in Charlottesville, Jacob Grandstaff wrote:

In Sacramento, California in June 2016, hundreds of Antifa rioters attacked 30-odd members of the white nationalist Traditional Workers Party (TWP). Although Capital Research Center does not support the goals of the TWP, the group had obtained a lawful permit to demonstrate when Antifa protesters violently refused to to allow the group to express its First Amendment rights. In the ensuing melee, 14 people received stab wounds, and two were sent to the hospital in critical condition (they both survived).

Antifa’s source of funds is as murky as its leadership.

“Since the left currently controls neither Congress nor the White House,” he said, “they decided they will try to rule the public mind and preserve their own power and respectability through two means.”

The first tactic is to propagate and circulate accusations, Milikh said.

“Right now, they have no evidence of collusion between the Trump campaign and the Russian government,” he said. “But they have made it their biggest issue, which is used to undermine the president’s powers by turning public opinion against him.”

The second tactic is “deploying well-organized and well-funded protests on the ground,” Milikh said, adding:

Protests are often successful for the left because a willing press often assists their cause by leaving the impression that the entire country—not just a handful of protesters—is vibrating with anger. This in turn teaches viewers the lesson that the bigger and angrier the crowd, the more just their cause. This tactic aims to prevent serious, reasoned public deliberation and debate.

The New York City branch of the Antifa network says on its website that it is keen on using social media to galvanize support.

“NYC ANTIFA is an autonomous blog that is trying through different media (news, videos, and information in general) [to] help to build, defend, educate, and create an effective cultural resistance against fascism,” the website says.

The New York group recently marked its third annual International Day of Solidarity With Antifascist Prisoners, an event detailed and described on its website:

The July 25 International Day of Solidarity With Antifascist Prisoners originated in 2014 as the Day of Solidarity with Jock Palfreeman, an Australian man serving a 20-year sentence in Bulgaria for defending two Romani men being attacked by fascist football hooligans. Whether acting as individuals or as part of larger organized demonstrations, this is the kind of bravery and solidarity which defines antifascist actions against the forces of hate.

Since the day of solidarity last year, we have seen this spirit all over the world—in Indonesia, Czech Republic, Brazil, Poland, England, Greece, the United States, France, Syria, Australia, Japan, and all points in between.

Among the fringe groups on the right participating in the so-called “Unite the Right” event in Charlottesville, as chronicled on Wikipedia, were clubs of the neo-Nazi website The Daily Stormer, the neo-Confederate League of the South, the National Policy Institute, and the National Socialist Movement. Other involved groups include the Ku Klux Klan, the Fraternal Order of Alt-Knights, the Traditionalist Workers Party, Vanguard America, the American Guard, the Virginia Minutemen Militia, the Nationalist Front, and Anti-Communist Action.

Among liberal and leftist groups identified on Wikipedia as on hand in Charlottesville were Antifa, Black Lives Matter, Anti-Racist Action, the Democratic Socialists of America, the Workers World Party, the Revolutionary Communist Party, the Industrial Workers of the World, the Metropolitan Anarchist Coordinating Council, Redneck Revolt, and Showing Up for Racial Justice.