Beleaguered GOP Leaders Make Their Pitch, but Will Trump’s Party Buy It? 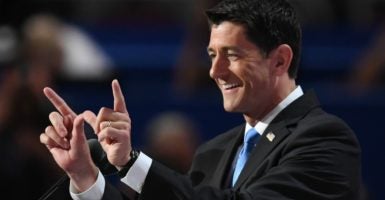 Republicans such as House Speaker Paul Ryan have controlled the House since 2010 and the Senate since 2014. But former Trump campaign manager Corey Lewandowski doesn’t blame GOP brass for failing to deliver conservative victories. (Photo: Pat Benic/UPI/Newscom)

Campaigning as an outsider, the New York businessman has promised to “make America great again” by fixing a political system run by career politicians. But former campaign officials and some current delegates don’t blame the party establishment for the status quo.

Republicans have controlled the House since 2010 and the Senate since 2014, but Lewandowski didn’t blame GOP brass for failing to deliver conservative victories. Divided government, he said, causes political gridlock.

“I do think it’s really hard to govern while you have the majority in Congress, but you don’t have the administration,” he said. “There are competing interests there.”

Two of the leaders most responsible for Republican strategy over the past six years have prime time speaking spots Tuesday. Ryan, R-Wis., and McConnell, R-Ky., will address the convention gathered at Quicken Loans Arena.

A common complaint of conservatives is that leadership hasn’t used the legislative branch’s power of the purse to check what they consider President Barack Obama’s executive overreach.

Tony Perkins, a Louisiana delegate and former member of the state’s House of Representatives, said the outcome of the GOP primary suggests there is widespread dissatisfaction with Republicans in Washington.

“They need to be more aggressive,” Perkins told The Daily Signal about GOP leadership. “They need to challenge the president more. They’ve allowed him to control the narrative and they don’t appear to go toe-to-toe with him. The American people want a fighter.”

Both Ryan and McConnell have been regular conservative targets. Members of the Freedom Caucus and Republican Study Committee regularly condemn leadership for cutting deals and caving during negotiations with Democrats.

Conservatives complain that Congress, while being under Republican leadership, has allowed Obama to bypass the legislature, increase the size of government, and run up the national debt.

But that just shows Republicans are good at picking their fights, says Alec Poitevint, a Georgia delegate, Trump supporter, and former manager of the 2012 GOP convention in Tampa, Florida.

“Sometimes there are battles when you know you cannot win,” Poitevint told The Daily Signal. “But the reality is that the American people have been moving in a direction where they want real change for several years.”

It’s not always clear where Trump stands on certain conservative issues, however. The candidate has already strayed from traditional Republican orthodoxies on policies ranging from the minimum wage to free trade agreements to abortion.

Roger Stone, a senior political adviser to Trump, told The Daily Signal that the candidate took that approach because he “realizes platforms are meaningless.”

That creates an opportunity for Republican leadership to set the presumptive nominee’s policy agenda, said House Ways and Means Chairman Kevin Brady, R-Texas. He points to Ryan’s “A Better Way” agenda as a good place to start.

“Those are the ideas that can change the country, the ones we ought to be uniting behind,” Brady told The Daily Signal.

But Republicans haven’t launched efforts to achieve those reforms, and much of the Ryan agenda is made up of broad policy proposals, not prepared legislation.

The White House is responsible for Republican inaction, Brady explained, arguing that “this president made it clear very early on that he’s not interested in working on big bipartisan issues like tax reform, saving Medicare, or fixing the Affordable Care Act.”

Those reforms would have to come in 2017, Brady said.