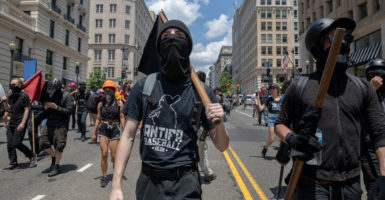 Enough is enough. The U.S. Justice Department needs to immediately open a criminal civil rights investigation of Antifa, an affiliation of radical activists and left-wing groups whose name, ironically enough, is short for “anti-fascists.”

Its attack on journalist Andy Ngo was beyond the pale. Federal law enforcement has an obligation to stop any extremist organization that is apparently organizing and precipitating violent attacks, especially if state and local authorities seem reluctant to take action against what has all the makings of a domestic terrorist organization.

We cannot have any confidence that the political leadership of the city of Portland will allow its local law enforcement to do anything about this, either.

The Portland Police Association released a statement after the attack criticizing the mayor for restricting the ability of the police to stop Antifa, saying, “Our hands are tied.”

The association also says it has no doubt that no such restrictions would not have been in place “if this violence had been directed at Antifa.”

Mayor Ted Wheeler claims that he had not “directed Police Chief Danielle Outlaw or other officials to change their approach to arrests,” in addition to “defend[ing] the city’s response, or lack thereof, to members of Antifa who [have] blocked traffic and harassed bystanders” in the past.

But even the U.S. ambassador to Germany criticized the city’s executive in a series of tweets, questioning what more needs to happen to Wheeler’s citizens before protective action will be taken. Wheeler’s inaction is even less defensible because the mayor of Portland is also its police commissioner.

The well-known Quillette journalist wasn’t the only bystander attacked, as The Washington Times reports that “two [other] Oregon men—John Blum and Adam Kelly—were mobbed and pummeled by black-masked protesters in a horrific attack that left Mr. Blum bleeding profusely from wounds to his face and skull.”

Columnist Michelle Malkin noted that “both John & Adam were beaten by Antifa after trying to help a gay man in a sundress being chased down the street.” This all occurred in broad daylight, and was filmed by multiple bystanders while Portland police stood on the sidelines and did nothing to stop it.

The assault did not come out of nowhere. In fact, it seems to have been a targeted attack given that the protest planners specifically (and falsely) labeled Ngo as a “far-right Islamophobic journalist who … also targets the [Democratic Socialists of America] while dismissing as hoaxes a series of assaults against the Portland LGBTQ community” in advertising the event in the days leading up to the march.

Federal criminal law has a provision that applies directly to what Antifa is apparently doing: 18 U.S.C. §241 prohibits conspiracies to “injure, oppress, threaten, or intimidate any person … in the exercise or enjoyment of any right or privilege secured to him by the Constitution or laws of the United States.”

Moreover, that same law prohibits individuals from going “in disguise on the highway or on the premises of another, with intent to prevent or hinder his free exercise or enjoyment of any right or privilege so secured.”

Acting as a journalist, Ngo was obviously exercising his press freedom as secured by the First Amendment, and the Antifa thugs who attacked him violated Section 241, particularly since they were disguised.

Violating this statute is punishable by up to 10 years in federal prison.

Further, as noted in a 1951 University of Pennsylvania Law Review article, “the ‘in disguise’ language [that] began the section … had its origin in ‘the doings of the Ku Klux [Klan].’” Antifa seems to have adopted the KKK’s tactics.

Ngo also may have a personal claim for damages under federal law against Antifa and its members.

Another federal statute, 42 U.S.C. §1985(3), says, “If two or more persons … conspire or go in disguise … for the purpose of depriving … any person … of the equal protection of the laws, or of equal privileges and immunities under the laws … the party so injured [may recover] damages … against any one or more of the conspirators.”

As we now know, Wheeler failed to protect his citizens, as police were noticeably absent when Ngo was being attacked, despite Antifa’s long record of violence, attacks, and mob behavior.

As a result, Ngo may have a claim directly against Wheeler and other city officials under 42 U.S.C. §1986, which creates liability for anyone who “having knowledge that any of the wrongs conspired to be done” in violation of Section 1985 “are about to be committed, and having power to prevent or aid in preventing the commission” fails to do so.

As National Review’s Douglas Murray wrote in his article on the protest, the “real lesson of Saturday is that anybody interested in genuine anti-fascism should from now on aim themselves directly at Portland’s Antifa. These are the people of our day who behave most like fascists. It is high time that they were treated as such by officialdom and civil society alike.”

On It’s Going Down, a popular website for Antifa and its supporters, a 2016 blog post predicted the chaos that has now become commonplace in more “progressive” parts of the country.

When asked who on the left can respond to the inauguration of Donald Trump, the authors wrote:

The answer is clear as day, but it isn’t in the halls of power, in the politicians, the leaders of the unions, or in the big NGOs. Instead it’s in the rioters. The blockaders. The people in ski masks and in the streets. The ones on the front lines fighting with the cops.

It is shocking to assert that “rioters, blockaders, cop-fighters, and people in ski masks” are the enlightened nobility who can save our constitutional republic from internal ruin.

It is also plainly wrong. And it is time that federal law enforcement and Justice Department officials take notice of this potentially ominous threat to our civil society.