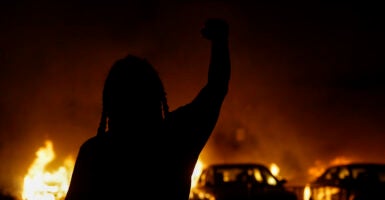 Increasingly violent radicals and organized violence pose a very real threat to safety on our streets and equal protection under the law. Pictured: A man clenches his fist as he watches vehicles on fire during a riot as demonstrators protest the police shooting of Jacob Blake on Aug. 24 in Kenosha, Wisconsin. Blake was shot in the back multiple times by police officers responding to a domestic dispute call. (Photo: Joshua Lott/The Washington Post/Getty Images)

The organized violence plaguing Portland, Oregon, and other cities has already lasted longer than Kid Rock’s marriage to Pamela Anderson. And there is no sign that the deliberate attacks will end any time soon.

Indeed, the looting, threats, arson, assaults, intimidation, and extortion seem to be spreading, now reaching into smaller cities and suburbs. Here are five reasons these emboldened and increasingly violent radicals pose a very real threat to safety on our streets and equal protection under the law.

No. 5: We Are Facing a Capable Enemy

The street militias have shifted targets and tactics to sustain pressure on communities and local officials. They have become consistently more belligerent. They have developed aggressive legal tactics, allowing them to bail out rioters—even those charged with assaulting police—almost as quickly as they are arrested.

They have also developed sophisticated social networking and media strategies that allow them to distribute how-to-riot guidance (such as how to avoid being identified and arrested) as well as spread disinformation and propaganda.

Further, it is clear these groups have robust financial and logistical support. These guys are not going to run out of steam like easily bored teenagers or liberal activists who have to go back to their day jobs.

Backed with a large war chest, this organized radicalism presents a persistent threat, constantly seeking new ways and new places to the make rest of our lives miserable.

Sustained violent protests attract extremists who crave even more extreme violence. And, as we saw over the weekend in Portland, violent extremists draw counter-extremists, who see the challenge as a green light to press their own radical agenda.

The Portland tiff between Antifa and the white supremacist Proud Boys was fairly tame stuff—mostly pushing, punching, and pepper spray. But, unchecked, these extremist vs. extremist clashes could well escalate into deadly violence and mayhem.

No. 3: Local Officials Have Failed Us

Portland, Seattle, Chicago, and other cities where violence has spiraled out of control share one common liability: political leadership that has utterly failed to address public safety.

Organized crime of all kinds thrives when it can exploit weak enforcement and gaps between local, state, and federal law enforcement.

No. 2: Our Media Have Failed Us

It is astonishing that the organized violence in American cities has not received wall-to-wall coverage from mainstream media. Equally astonishing is the absence of any substantive investigative reporting into the operations of Antifa, Black Lives Matter, or other organizations creating and condoning chaos in our streets.

Apparently unable to distinguish peaceful advocacy for justice from radical agendas intent on achieving change by warring on the American people, the media remain content to pretend that eyewitness accounts and even videos of nightmarish violence are somehow overblown.

Too often, the handful of reporters and commentators who have given the issue the attention it deserves are dismissed, ignored, or ridiculed.

No. 1: Our Politicians Have Failed Us

The safety of American streets and the sanctity of our homes and businesses ought to be as strongly a bipartisan agenda as the demands for racial equality. They are not. Virtually to a person, one side of the political aisle has ignored this threat, like a fireman at a five-alarm blaze ignoring a fire.

We have to stop playing politics with the safety and livelihood of the American people.

This won’t stop—and, indeed, will get worse—if everyday Americans don’t start standing up more and saying “no more.”

Find ways to show support for our law enforcement agencies.

Start demanding that local and state officials work with the federal government to disrupt and demolish the organized, criminal militias on our streets.

Put politics aside and work with your neighbors to reject violence and help bring communities together.

And for heaven’s sake, stop giving money to groups that funnel that money to those who supply and bail out the people who are tearing up our streets. Use that money instead to help groups intent on rebuilding our neighborhoods and mending the tears in our social fabric.