Amid the Chaos, Meeting the Challenge of Saving Our Streets 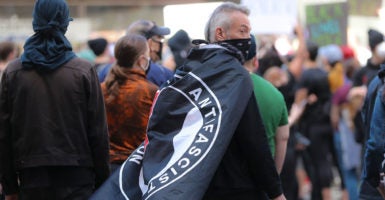 Hundreds of protesters gather at Government Center, including a protester with an Antifa flag draped over his shoulders, during a rally sponsored by the Youth of Greater Boston to demand justice for George Floyd and to support the Black Lives Matter movement in Boston May 31, 2020. (Photo: Matthew J. Lee/The Boston Globe/Getty Images)

Anyone who has spent time working on the issues of safeguarding our homes from terrorists, hurricanes, and plagues understands the public safety challenge facing local officials, law enforcement, and everyday Americans.

We haven’t seen anything quite like this in recent memory. We need leaders of strength and integrity to get through this.

What makes dealing with the unrest difficult is the complexity of what’s happening on our streets. Mixed in the mayhem are protesters, looters, and rioters, along with intentional agitators.

Each one of those groups demand a different response.

People have a right to protest. That’s not up for debate. If they want to practice civic disobedience, however, that’s a choice.

Dealing with public protests is part and parcel of law enforcement’s responsibility for providing for public safety. Washington, D.C., for example, had a Million Man March in 1995, and the city got through that just fine.

The problem is that this is not the only challenge in many American cities.

Violence, arson, rioting, looting, beatings, and even killings have wrapped themselves around the protests. That mayhem is intolerable.

Stopping violence does not in any way dishonor or diminish the right of lawful protests. There is no cause that justifies violence against innocents.

Burning the corner store, destroying the lives and livelihood of immigrants and minority-owned business, and gutting and scaring communities honor no cause.

Public officials must bring every available resource to bear to protect the citizenry. In that regard, it is more than appropriate to supplement local law enforcement at their request with state and federal assets (such as resources from the Justice Department, FBI, and Department of Homeland Security), as well as with military assistance to civil authorities.

Violence in Washington, D.C., for example, plummeted after the National Guard was mobilized. Being fearful of impeding political protests is not an acceptable excuse to avoid stopping inexcusable and indefensible violence.

There are also agitators not just organizing political protests, but inciting and orchestrating violence to sow political mayhem. These actions are tantamount to terrorism.

Both the FBI and the Department of Homeland Security have already raised concerns. At the moment, the evidence of that activity is incomplete, but it includes foreign trolls inciting violence, as well as domestic groups from across the political spectrum.

Finding, investigating, and rooting out these threats is important, significant beyond the immediate response to the riots. Unchecked, organized violence threatens the fabric of American society.

To deal with all these challenges simultaneously, across the country we need leaders of competence and character—working together.

Leaders ought to be able to manage public protests, as well as deal with the public health concerns of large gatherings in the time of COVID-19.

The president is right. Mayors and governors ought to bring all of the available public safety resources to bear to stop violence in our communities.

The U.S. military, including the National Guard, can provide trained, responsible, and appropriate lawful assets available at the request of state and local officials. The federal government should not have to step in and direct those efforts.

At the same time, the federal government needs to take the lead going after the professional agitators.

Federal, state, and local law enforcement and intelligence officials must pool their efforts and resources.

The president was right to designate Antifa a domestic terrorist organization. That will help law enforcement find all the malefactors who have no interest other than to hurt all of us.

The vitriol, finger-pointing, and politics aside, we have all the tools we need to provide the public safety all of us deserve. It’s time to stop the squabbling and start safeguarding the communities and homes of everyone.