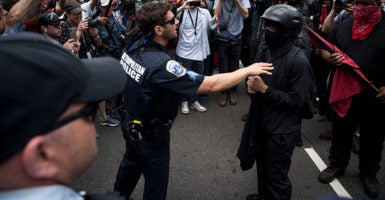 A police officer talks to a member of Antifa after an Antifa clash with a Trump supporter during a Proud Boys rally on July 6 in Washington. (Photo: Marlena Sloss/The Washington Post/Getty Images)

President Donald Trump said Wednesday he was considering designating masked Antifa militants as a terrorist organization because of the group’s violent actions across the country.

“We’re looking at a lot of different things relative to Antifa. Antifa, in my opinion, is a terrorist organization,” Trump said of the mask-wearing group in response to a question at a press gaggle before his departure for Louisville, Kentucky, to address a national veterans convention.

“You see what they’ve been doing,” Trump said of the loosely organized far-left group. “We’ve had great support on that. We’re looking at various, different things.”

Antifa, which claims to be “anti-fascist,” is best-known for rioting and clashes with groups it considers to be “white nationalists.” In June, a group of Antifa protesters in Portland, Oregon, beat up journalist Andy Ngo, who is Asian. He sustained injuries, including a brain hemorrhage.

A designation as a terrorist organization would mean that the federal government would provide federal and local law enforcement with additional resources as needed to deal with Antifa.

Section 802 of the USA Patriot Act designates an individual or group as a domestic terrorist if they violate laws “to intimidate or coerce a civilian population,” “influence the policy of a government by intimidation or coercion,” or “to affect the conduct of a government by mass destruction, assassination, or kidnapping.”

Potentially, federal law enforcement could also have the authority to charge anyone who provides assistance to that person or organization so designated.

However, the American Civil Liberties Union and the Anti-Defamation League have opposed the designation, contending that it is overly broad and could be misapplied to groups not associated with violence.

Antifa was back in Portland this past weekend, as was the far-right group Proud Boys.

In July, an Antifa member threw firebombs at an Immigration and Customs Enforcement facility in Tacoma, Washington. The group also has made numerous threats against ICE agents.

Sen. Ted Cruz, R-Texas, has called for an investigation into Antifa and into the Portland city government, which he said didn’t police Antifa’s violent actions. Cruz also co-sponsored a bill with Sen. Bill Cassidy, R-La., to designate Antifa as a terrorist organization.