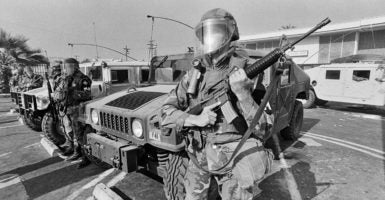 The Insurrection Act was last used in 1992 during the Los Angeles riots following the acquittal of police officers who beat Rodney King. Pictured: Armed with machine guns and grenade launchers, National Guard soldiers hold a line on Crenshaw Blvd. in Los Angeles during the riots in 1992. (Photo: Ted Soqui/Corbis/Getty Images)

Prior to passage of the act in 1878, federal marshals could deputize members of the armed forces to help enforce federal law. The phrase “posse comitatus” means the “power of the county,” and comes from our common law roots. The Posse Comitatus Act was passed to keep members of the military out of enforcing civilian law, an important principle in a republic.

That said, another statute that we will discuss later provides for limited exceptions.

First, state governors may use their state militia, otherwise known as the state National Guard, to assist law enforcement. That does not trigger the act.

The domestic assistance rendered thus far by the military has been in the form of the National Guard, a military reserve force located in each state and territory normally responsive to state governors, but when ordered to federal service, to the president.

Most Americans are not aware the National Guard can be called into service in three different statuses, each with its own authorities and funding mechanisms.

National Guard units can be ordered to active service in state active-duty service by the respective governor, and funding for that service is paid for by the state. That’s the status under which units have been employed to support local law enforcement.

Units can also be ordered to service under Title 32 status, whereby they remain under the control of governors, but their service is paid for by the federal government.

In each of these situations—state active-duty and Title 32 status—the National Guard can be used to conduct law enforcement roles as an exception to the Posse Comitatus Act.

The Insurrection Act of 1807, however, carves out three exceptions to the prohibition on using U.S. armed forces to assist domestic law enforcement activities.

The president was given the power to call out the militia very early in the country’s history to deal with threats on the frontier and to enforce federal law and deal with instability, and this authority was expanded to include the regular military in 1807.

That power was used a great deal in the tumultuous years following the Civil War as new governments were formed in the Southern states.

Through the Insurrection Act, Congress gave the president the authority to use the military in the event of civil disorder or an insurrection in which federal laws are unable to be enforced.

The exception to Posse Comitatus created by the use of the Insurrection Act applies to National Guard troops operating in a Title 10 status and to active-duty military forces.

A Naval Academy professor, retired Cmdr. Mark Nevitt, explains how it’s legal for the president to use the military to quell the riots in the states even without the consent of the governors, but says the president is constrained by a number of factors, notably by Congress and the courts.

Nevitt says, “[T]here are two Insurrection Act provisions that can be invoked by the president, irrespective of a state’s request or underlying desires.”

Whenever the President considers that unlawful obstructions, combinations, or assemblages, or rebellion against the authority of the United States, make it impracticable to enforce the laws of the United States in any State by the ordinary course of judicial proceedings, he may call into Federal service such of the militia of any State, and use such of the armed forces, as he considers necessary to enforce those laws or to suppress the rebellion.

In a June 1 speech from the Rose Garden, President Donald Trump alluded to the use of active-duty military forces in addition to the National Guard to restore law and order, presumably under the authorities of the Insurrection Act.

Also on June 1, an active-duty military police battalion was ordered to be moved to the Washington, D.C., area from Fort Bragg, North Carolina. Because of Washington’s unique status as the capital, the deployment can be ordered by federal—as opposed to city—officials.

The Insurrection Act has been used a number of times throughout U.S. history, but has become a very rare thing since the end of the 1960s civil rights disturbances. It was last used in 1992 during the Los Angeles riots following the acquittal of police officers who beat Rodney King.

However, it’s an extreme measure and one that should be employed only if there are no other options.

The National Guard is the primary and best tool governors and the president have to support state governments during times of unrest.

Active-duty military units receive less training in riot control and do not have the local ties to the communities that the National Guard enjoys.

The use of the Insurrection Act and deployment of active-duty military should be reserved as an absolute last resort.