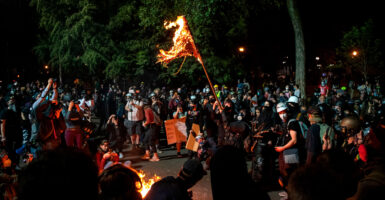 A demonstrator burns an American flag outside the federal courthouse in Portland, Oregon, on July 31. (Photo: Alisha Jucevic/Agence France-Presse/Getty Image)

Voice of America, the U.S. Agency for Global Media’s flagship operation, is putting its own spin on coverage of the Black Lives Matter riots in the United States.

It’s a spin consistent with much of the rest of the mainstream media—the CNNs of the world—and hardly represents an accurate image of what is going on in America today.

An Aug. 1 Associated Press story run by the VOA about events in Portland, Oregon, described the nature of the protests, which it said have now become so peaceful that federal forces could be withdrawn: “Portland Protest Strives for Peace as U.S. Forces Drawn Down.”

In fact, the presence of federal agents comes across as provoking violence, and their removal as the way to calm the waters. The demonstrations sound positive, even idyllic.

Despite the fact that the feds were actually invited in to stop explosive violence raging out of control in Portland, with the widespread destruction of property and lives as a consequence, there was no mention of this constructive role in the story:

A group identified as ‘Firefighters for Black Lives Matter’ gathered in a small park a couple miles west of the courthouse. Another group, ‘Unemployed Workers for Black Lives,’ began to march towards the federal building around 8 p.m.

People stood next to a makeshift memorial, with the pictures and names of Black people killed by police, at the Waterfront Park. A parade of cars with Black Lives Matter signs taped to their windows slowed traffic in the city.

Just after midnight, the crowd had grown to over 1,000 people who remained outside chanting ‘Black Lives Matter’ and shouting the names of Black people killed by police. Groups were also standing together engaging in conversations about social injustice.

The AP story is fairly typical of the coverage of race relations and Black Lives Matter at Voice of America.

Quoting lawmakers in the U.K., New Zealand, and Australia debating racial inequities, the report found room for just one terse sentence about the reaction of President Donald Trump: “Trump has described the destruction of Civil War-era statues and other memorials, including those honoring Christopher Columbus, as an attempt to cleanse the U.S. of its history.”

Yet another story dealt with Trump’s objection to having the words “Black Lives Matter” painted in giant letters on the street in front of Trump Tower, a deliberate provocation by New York City officials.

“The president is a disgrace to the values we cherish in New York City,” Mayor Bill de Blasio’s spokesperson, Julia Arredondo, is quoted as saying. “He can’t run or deny the reality we are facing, and any time he wants to set foot in the place he claims is his hometown, he should be reminded Black Lives Matter.”

The article gives de Blasio the last word, tweeting back at Trump, saying, “Only warped minds equate the words ‘Black Lives Matter’ with violence. It’s a movement to recognize and protect the lives of Black people.”

On and on it goes. The viewpoints generally expressed in these Voice of America articles are those of demonstrators, protesters, and rioters, and indistinguishable from coverage in The New York Times or The Washington Post.

Meanwhile, the violence of the riots, the vandalism against property and American history and culture, and the Marxist roots of Black Lives Matter are not covered.

American taxpayers fund Voice of America and the other news networks of the U.S. Agency for Global Media. The very least they should ask for is balance in reporting, and they are not even getting that.