Voice of America Is Undermining the US Abroad. Trump Can Easily Change That. 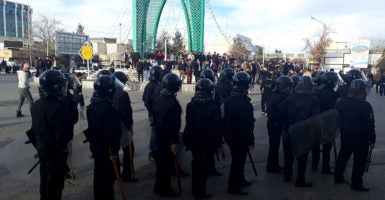 Iranian police gather near a group protesting high prices and the poor state of the Iranian economy. (Photo: ABA/Newscom)

A growing chorus of critics is demanding the Trump administration get on with the business of reforming the Broadcasting Board of Governors and the vast international broadcasting complex it oversees on behalf of the U.S. government.

Reforming the board was included in this year’s National Defense Authorization Act, which President Barack Obama had signed into law. The fact that the legislative mandate for reform already exists makes it doubly frustrating that nothing has been done to improve U.S. international broadcasting.

But coverage of the recent anti-government protests throughout Iran by Voice of America, the broadcasting agency’s flagship service, has added fuel to these simmering concerns. More than 1,000 people have been arrested and at least 22 killed in the protests that have roiled the country since December.

Not only was Voice of America slow to cover the protests, but, in an apparent effort to “balance” President Donald Trump’s support for the protesters—a refreshing change of tone from the White House—Voice of America’s Persian service has repeatedly run stories reflecting the Iranian government’s point of view.

Headlines from Voice of America’s English-language website include, “Khamenei: US Will Fail to Cause Unrest in Iran” and “Pro-Government Rallies Follow Days of Protests in Iran.”

The coverage routinely includes chunks of quotations from statements by Iranian leaders and clerics. Voice of America reported, “Hard-line cleric Ahmad Khatami told worshippers in a sermon Friday that those arrested should be treated as enemies of Islam, particularly those who have burned the flag.”

“There should be no mercy for them,” Khatami said. In the context of Iran, “no mercy” means the promise of a slow and gruesome death.

On Twitter, Iranians have expressed their outrage that Voice of America’s Persian service appears to have become the “Voice of the Mullahs.”

Voice of America is even using the Revolutionary Guard’s website as a source. For instance:

“Iran’s revolutionary people along with tens of thousands of Basij forces, police and the Intelligence Ministry have broken down the chain (of unrest) created … by the United States, Britain, the Zionist regime (Israel), Saudi Arabia, the hypocrites (Mujahideen) and monarchists,” the Guard said in a statement on its Sepahnews website.

In response to growing criticism, the Broadcasting Board of Governors’ management pointed out that it created a live blog to feature news from Iran’s protests starting on New Year’s Eve.

The blog appears to have been active for about a week, the latest posting being on Jan. 8, featuring Twitter videos and various content from Radio Free Europe/Radio Liberty and Voice of America.

Also troubling, in an editorial published on Jan. 18, The Wall Street Journal reported that one problem with the Broadcasting Board of Governors’ treatment of the Iranian protests lies in a rift between the State Department and the board over Iran.

From the president himself to United Nations Ambassador Nikki Haley, the Trump administration has been outspoken in its support for the Iranian protesters. But according to a recent Wall Street Journal editorial, the board could be doing more to fund censorship circumvention software to help Iranian dissidents.

While Iranians are desperate for reliable circumvention technology, the [Broadcasting Board of Governors] leadership has spent only $15 million of its $787 million 2017 budget on internet freedom and anti-censorship projects, and the agency is telling vendors it’ll take weeks to direct more funding to these projects.

The editorial then proceeds to ask, “Is President Trump aware that he could dismiss the … current board and nominate a CEO who’s more attuned to foreign policy and the fight for freedom?”

If not, someone should tell the president just how important it is to advance the nomination of a real leader and reformer for this troubled agency.