A Museum, or Another Monument to Identity Politics? 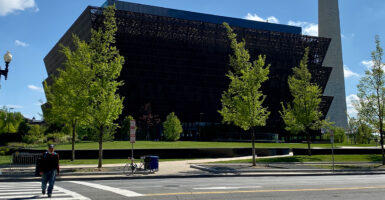 The National Museum of African American History and Culture, which a new Latino museum will be patterned after, is seen April 18, 2020, in Washington, D.C. (Photo: Daniel Slim/AFP/Getty Images)

The House of Representatives has unanimously approved the creation of another Smithsonian institution, a National Latino Museum. It was one more sign that political leaders are desperately reacting to a time of crisis with policies we will regret for decades.

There is every indication, judging from our “woke” times, that this museum will become yet another platform to catalog and publicize perceived grievances, from the large and real ones to the most inadvertent “microaggression.” It will, for one thing, perpetuate the idea that the country is divided into identity groups that often were created by the bureaucracy at the insistence of activists.

It definitely won’t be about celebrating the Spanish presence in America—ironically the only thing that binds together the group the Census Bureau labels as “Hispanic.” We know this because leftist mobs are tearing down statues of conquistadors and saints.

So, no, it won’t be “the 1565 Project,” commemorating the year in which Pedro Menendez de Aviles founded the first permanent settlement in the United States, St. Augustine.

Chicano activists and left-leaning ideologues took care of that starting in the 1960s. In the words of UC Berkeley professor Cristina Mora, “For Chicanos, Mexican-Americans constituted a ‘raza,’ a distinct racial minority that had been persecuted.”

The persecuted part was the key. That would be the next bonding agent.

In their pursuit of coast-to-coast political power, these activists intimidated the government into engineering a pan-ethnic umbrella that included also Puerto Ricans in the Northeast and Cuban emigres in Florida. The bureaucracy caved, and in 1977, the Office of Management and Budget in the Carter White House created the “Hispanic” category.

A remarkable piece of legislation in 1976, Public Law 94-311—the only in U.S. history to categorize an ethnicity—reads, “a large number of Americans of Spanish origin or descent suffer from racial, social, economic and political discrimination and are denied the basic opportunities they deserve as American citizens and which should enable them to begin to lift themselves out of the poverty they now endure.”

From the start, therefore, what Hispanics supposedly had in common was neither ethnicity, race, nor language, but their supposed marginalization.

Now that the government is considering giving “Hispanics” preference in receiving a COVID-19 vaccine—a problematic concept in itself—it is especially time to question group formation based on grievances, not science or culture.

Writing in the Yale Journal on Regulation, law professor David Bernstein makes a convincing case that that the Food and Drug Administration and the National Institutes of Health made a huge mistake when they mandated the use of the OMB categories in medical and scientific research.

“Latinos’s origins can be any combination of African, Asian, European and Indigenous. Nor are they culturally homogenous. There is no reason to believe that data about Dominican residents of New York City is applicable to indigenous Mexican farm workers in California,” he wrote.

The Latino museum is to be used explicitly to eternalize this fiction, not to celebrate the reason Dominicans, Cubans, Mexicans, etc. fought so hard to come here: to pursue the American dream.

Acting as a grievance hothouse is, sadly, what many seem to think should be the mission of the National Museum of African American History and Culture, another taxpayer-funded Smithsonian institution that the Latino one patterns itself after.

That museum is currently running this instructive online portal on “whiteness,” a concept it blames for creating “a culture where nonwhite persons are seen as inferior or abnormal.”

Until recently, the exhibit included a racist graphic that listed individualism, independence, the nuclear family, objectivity, rational linear thinking, hard work, planning for the future, and delayed gratification as elements of whiteness.

The museum took down the graph only after coming under a deluge of criticism on social media.

That the African American museum thought it fit in the first place to publish this material is disturbing, but a harbinger of things to come for the “Latino” one. These messages are a setback for nonwhite children, telling them that the habits and traits required for success—punctuality, hard work, striving for perfection, the use of reason—are just another way of acting white.

But even after getting rid of that racist graph, the museum persisted with the other heinous material driving home the notion that race is at the heart of everything in America.

These themes are the warp and woof of the times we are living through. These are the messages driven constantly by “anti-racism” consultants such as Robin DiAngelo, who—despite charging about $15,000 for a two-hour lecture—says she wants to overthrow capitalism because it is racist. DiAngelo recently brought this poison to Congress when she spoke to 184 House members.

We live in an age of victimhood culture, when resentments are carefully curated to demonstrate a larger pattern of domination, inequality, and marginalization—the purported structural, deeply ingrained racism in every aspect of American life.

A museum is where you curate things. Conservative leaders should not be creating new platforms to instruct future generations on their marginalization.

Originally published by The Press of Atlantic City