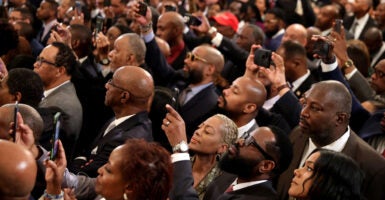 The conservative movement's expectations are so low when it comes to the black community that even miniscule progress is celebrated jubilantly. Pictured: Guests listen to President Donald Trump during a Black History Month reception in the East Room of the White House on Feb. 27, 2020. (Photo: Chip Somodevilla/Getty Images)

Since the Nov. 3 election, I have received many calls and emails from influential Republicans and prominent conservatives. Despite losing the White House, they were high-fiving about President Donald Trump’s going from 8% of the black vote in 2016 to 12% in 2020.

What a sad state of affairs when a 12% market share is reason to celebrate.  In most industries, this would be viewed as unacceptable and embarrassing.

Herein lies the problem with the conservative movement: Our expectations are so low when it comes to the black community that even miniscule progress is celebrated jubilantly.

The reason expectations are so low is because deep down inside, conservatives–for purposes of this column, I’m using the words Republicans and conservatives interchangeably–know that they have not really made a serious effort to cultivate relations with the black community.

They do, in their minds, just enough not to be called racist.

Those who have followed my writing over the years know that I have been critical of the lack of “substantive” engagement with the black community from conservatives.

If your goal is to be entertained or to throw red meat to the white base of the party, then they may be appropriate speakers. But if your goal is to build relations with the black community, they are counterproductive.

I challenge conservatives to specify the number of blacks they have in decision-making positions within their organizations. How many blacks do they have around them that tell them what they need to hear and not what they want to hear?

How many five- and six-figure black consultants do they have on retainer?  How many black vendors do they contract with during the course of a year?

When I say decision-making positions, I mean someone who can hire or fire; has budgetary authority to  spend money; or can get meetings set up with key executives.

This is the 21st century, and many conservative organizations have little to no reflection of the diversity that our country presents.  How is this possible?

Are they racist? Absolutely not. People tend to gravitate toward the things they are familiar with; it’s a logical and natural thing to do.

No, I am not talking about imitating the Democrats. No bean counting. They, as usual, go overboard with their push for diversity, to the point that it is discriminatory.

But, if you are a conservative and don’t notice that every time you’re in a meeting or conference that not one black person can be found there, that is a problem.

Democrats are obsessed with diversity and Republicans are oblivious to diversity.

Both are equally wrong and detrimental to our American values.

But true leaders understand this dilemma and make a conscious decision to inject diversity into their organizations so they can remain relevant.  There is no evidence that conservatives have learned this lesson.

I have done PR and crises communications for some of the biggest names in politics, business, sports, and entertainment from all over the world.  I refer to myself as a “straticist,” not a strategist.

Most people in my profession understand PR or strategic communications, but few understand the merging of both when confronting an issue; thus, the word “straticist.”

The Republican Party and the conservative movement have a brand problem. We have allowed radical liberals to brand us as racist.  A lie that is repeated enough becomes the truth.

Conservatives are under the misguided notion that blacks need to be sold or persuaded on conservatism.  Blacks are more conservative than most whites; survey after survey has shown that blacks are the most churchgoing people in the country.

Blacks don’t need to be lectured about family values and entrepreneurship.  We had the most intact, stable families from the 1900s to the 1950s, and the highest marriage rates. Then Democrats in the 1960s injected our community with welfare and all these radical liberal “social” programs.

We always have been business-minded, even before slavery; until, that is, Democrats cut off our access to opportunities and capital.

Conservatism is in our DNA.

The sooner conservatives grasp this, the sooner we can begin to make significant progress with the black community. The sooner conservatives stop promoting black minstrel shows dressed up like outreach, the sooner more blacks will publicly join our cause. To cite two examples: The “commentary” of a certain upwardly mobile young lady and a certain comedic duo, each with their own podcasts, play into the worst stereotypes of blacks ever perpetrated.

In the immortal words of my grandmother: “Boy, your actions speak so loud, I can’t hear a damn thing you are saying!”

How appropriate for conservatives.

Conservatives must first and foremost engage with black entrepreneurs. They are the leaders of the black community, not the preacher-politicians.

When all is said and done, so far there has been more said than done.