What Conservatives Must Understand About Black Americans 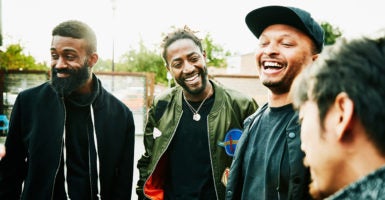 "The few blacks whom conservative surround themselves with tend not to have any connection to the black community," writes Raynard Jackson. (Photo: Thomas Barwick/Getty Images)

Over the years, many prominent conservatives have asked me why blacks are not more involved in the Republican Party and the conservative movement.

The answer is very simple: Conservatives have shown no demonstrable indication to the black community that we are welcomed by the party or the conservative movement.

As a matter of fact, conservatives force “real” blacks to make a false choice: to be black or conservative, as though we can’t be both.

Most blacks are conservative by nature and by upbringing. “Real” blacks don’t check their blackness at the door when they join a conservative group.

Is this done on purpose? Of course not, but it happens because the few blacks whom conservative surround themselves with tend not to have any connection to the black community.

They tend to be blacks who will go out in public and say things that a white person can only dream of being able to say and get away with it.

These are the blacks who claim they see no color; they claim racism doesn’t exist. They never miss an opportunity to criticize Al Sharpton. But they always seem to get a sudden case of laryngitis when a conservative says something negative or inappropriate about the black community.

>>> ‘An Uprising From the Strangest Places’: Sen. Tim Scott on Diversifying the Conservative Movement

Conservatives tend to surround themselves with blacks who make them feel comfortable, as opposed to blacks who can help them move the conservative agenda forward.

But before we can move the conservative agenda forward, we must first rehabilitate the meaning and brand of the word “conservatism.”

In their later years, they actually became quite supportive of several issues of particular concern to the black community, such as historically black colleges and universities.

The brands of the Republican Party and the conservative movement are so damaged that blacks can’t hear a damn thing they are saying, even though on issue after issue we are on the same page.

If conservatives really believe conservative ideas can and will solve the problems in Baltimore, Ferguson, St. Louis, and Los Angeles, when will they take their solutions to the marketplace of ideas within the black community?

I graduated from Oral Roberts University and Oral would always tell me: “Go into every man’s world and meet them at the point of their need.”

We need only be invited to become part of the team.

This invitation must come with no strings attached. Conservatives must be willing to open their minds to a new perspective. They must be willing to try to understand why my heart starts racing when a police car pulls up behind me at a stop light.

They must understand why I have resigned from several campaigns because white staffers thought they knew more about the black community than me.

Several friends of mine in Congress understand these issues and are working with me in tangible ways to move the conservative needle forward in the black community.

As a quote sometimes attributed to the poet and essayist Ralph Waldo Emerson goes, “The mind, once stretched by a new idea, never returns to its original dimensions.”