‘An Uprising From the Strangest Places’: Sen. Tim Scott on Diversifying the Conservative Movement 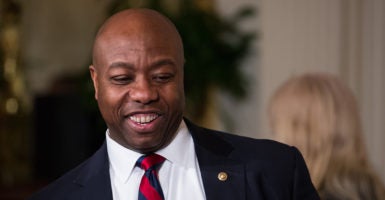 If a movement is going to lead America, it had better look like America.

That’s a fact conservatives have come to grips with in recent years as the nation undergoes significant demographic shifts. And it’s something Sen. Tim Scott, R-S.C., spoke to Thursday night as he stood before dozens of conservatives from minority backgrounds.

America needs “future generations of conservatives who will look like America,” he said, because conservative principles serve the good of all Americans.

Scott spoke of his own upbringing and unlikely rise to the Senate.

The child of divorced parents, Scott flunked out of high school and failed Spanish, English, world geography, and civics. His trajectory was not initially promising.

But failure did not get the last word.

“Through the powerful prayers of a super-duper mother and an amazing mentor, I started getting my life back on track,” Scott said.

Part of the reason for launching the Empower America Project, he said, was to cultivate young people like himself who had untapped gifts—people who might produce “the greatest uprising from the strangest places.”

Such an uprising, he said, could decisively shape the future of American politics.

“We believe that the best this nation has ever seen is coming,” he said.

Heritage’s James sounded a note of similar optimism as she took the podium. Her charge was simple, yet revolutionary in our day of scorched-earth politics: Go out and “win” the other side rather than defeating them.

That task may be a challenge, but it’s not as hard as we make it out to be.

James noted that there are many, many people who “are with us in their philosophy but who might not know it yet.” Anonymous conservatives, if you will. They are women, minorities, young people—“groups not traditionally conservative.”

“We’re going to need all of them,” she added, “if we’re going to stop the far-left’s radical, intolerant, and socialist agenda.”

These people are not only commonsense allies, but will actually help the movement look more like America itself.

“We need to represent the diversity of our nation,” James said. And minority leaders are uniquely positioned to lead and grow the movement.

“There are places that we can go as minorities and women that others cannot go,” she said. “There are things we can say that they dare not say. There are arguments that we can make with a certain authenticity. And so we should make them.”

These converts to our cause need not embrace the label “conservative” if that’s an obstacle to them. Instead, James offered an alternative: the label “solutionist.”

And conservatives need not fear that label, she said, because “our solutions work.”

James noted that a “solutionist” might even initially be a supporter of Sen. Bernie Sanders, I-Vt.

Conservatives shouldn’t write such people off, she said, because “we are more alike than different.” Rather than alienate them, we should look for common concerns and motivations, and ultimately persuade them that conservative policies are the solution to the problems we all want to fix.

But James sent a clear message to Sanders supporters as well: “You don’t care more about poor people than I do. I just happen to have different, and indeed, better solutions for how to lift people out of poverty.”

Those solutions are personal for James as someone who rose out of poverty.

James noted that the left’s policies have actually “brought harm to the very people that they intended to help.”

Ed Feulner, a co-founder of The Heritage Foundation and so far its longest-serving president, often shared his approach to political life: Conservatives must add and multiply, not divide and subtract.

Surely that mindset is essential for conservatives living in a diverse America—being willing to partner with others, issue by issue, whoever they are, for the good of the country.

If conservatives embrace that approach, as the attendees of Thursday’s dinner appeared to, the future is indeed bright.