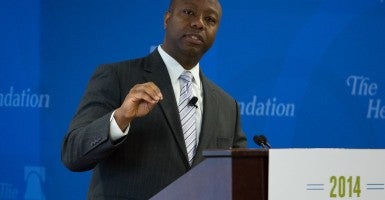 After 50 years of the War on Poverty with little results, it’s time for a new path forward.  In a speech at the 2014 Heritage Antipoverty Forum, Sen. Tim Scott, R-S.C., described his vision to lift more Americans out of poverty.

Scott’s speech emphasized an often-overlooked factor contributing to opportunity: marriage.  He spoke of the significance of marriage and the challenges for single-parent households from his personal experience living with a single mom after his parents’ divorce.

Healthy family formation, according to Scott, is a crucial starting point: “If we are really going to tackle the problem of poverty in America, we would do ourselves a great disservice not to focus on marriage.”

Why is marriage central to addressing the problem of poverty? A child born and raised by a single parent is five times more likely to be poor than a child raised in an intact home. “Eighty-eight out of a hundred times, we can eradicate poverty by having two parents in the house,” Scott said.

The last half-century has seen a surge in non-marital births. In 1960, less than 10 percent of children were born outside of marriage. Today that number is 40 percent.

The problem is made worse because the welfare state penalizes marriage. Misaligned welfare incentives contribute to the decline of marriage in low-income communities. As Heritage Senior Fellow Robert Rector explains in a recent paper on how the welfare state undermines marriage, “If a single mother who earns $20,000 per year marries a man who earns the same amount, the couple will typically lose about $12,000 a year in welfare benefits.  In effect, the welfare system makes it economically irrational for most low-income couples to marry.”

Scott overcame the odds, but plenty of others don’t. As he explained, ” There are a lot of negative things that happen to you when you flunk out of high school. One of the things is you lose about $250,000 in lifetime income for every year you do not finish.”

Finally, work is essential to putting people on the path toward self-sufficiency. Scott emphasized, “If you understand the value of work, if our government encourages work…we can restore the foundation of our nation.”

Every year, the federal government spends $1 trillion on more than 80 federal means-tested programs to provide low-income Americans cash, housing, food, medical care and targeted social services. Despite spending more than $20 trillion in the past half-century, the poverty rate remains nearly as high today as it was in 1960. And our nation is weaker for it.

Policymakers such as Scott are rethinking the war on poverty—they understand that it’s time to reduce marriage penalties in the welfare system and for leaders at every level to advance real choice in education.  They know that well-meaning intentions without results will not lead to opportunity for those who need it most. It’s time to change that and open the doors to real opportunity for all Americans.