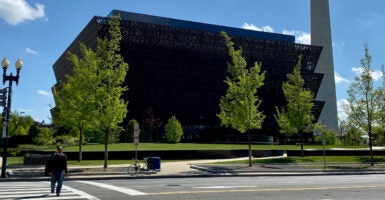 The National Museum of African American History and Culture in Washington recently removed and apologized for a racist page on its website. (Photo: Daniel Slim/AFP/Getty Images)

One would reasonably expect to learn about history at a history museum.

Unfortunately, at some museums, it seems you’re increasingly likely to receive an ideological sermon instead.

It was doing that, the museum said, to promote conversations about race that begin with “honesty, respect for others, and an openness to ideas and information that provide new perspectives.”

On that page was a since-deleted graphic on “whiteness” that was not only offensive to, well, pretty much everyone, but was also quite racist.

“White dominant culture, or whiteness, refers to the ways white people and their traditions, attitudes, and ways of life have been normalized over time and are now considered standard practices in the United States,” the graphic read. “And since white people still hold most of the institutional power in America, we have all internalized some aspects of white culture—including people of color.”

And what are those “aspects of white culture”?

There were some negative ones, like “master and control nature,” and the hilarious “steak and potatoes; ‘bland is best.’”

But there were countless others that simply seemed like good life practices, regardless of one’s skin tone, things such as “self-reliance,” “adherence to rigid time schedules,” “delayed gratification,” and commitment to the “nuclear family.”

Elsewhere on the web page, the museum labels “white supremacy” as an ideology in which white people are deemed “superior to nonwhite people.”

But the graphic, likely unintentionally, seemed to be promoting white supremacy by insinuating that nonwhite people are lazy, irresponsible, and perhaps have internalized “whiteness” qualities such as being “polite.”

After the chart was spotted and posted by Claremont Institute President Ryan Williams on Twitter, an online backlash prompted the museum to remove it and apologize.

“It is important for us as a country to talk about race. We thank those who shared concerns about our ‘Talking About Race’ online portal. We need these types of frank and respectful interchanges as we as a country grapple with how we talk about race and its impact on our lives,” the statement said, according to the Miami Herald. “We erred in including the chart. We have removed it, and we apologize.”

Despite the apology, one wonders how such a graphic was deemed appropriate to put up in the first place.

Of course, the website still contains incessant attacks on “white privilege” and references to the book “White Fragility: Why It’s So Hard for White People to Talk About Racism” by author Robin DiAngelo.

“White fragility,” according to Columbia University associate professor John McWhorter, who is black, is “about how to make certain educated white readers feel better about themselves” and actually promotes a “dehumanizing condescension toward black people.”

It’s infuriating that the Smithsonian or any other publicly funded museum would promote such material. But this sort of bias is becoming increasingly common.

The National Museum of African American History and Culture has been embroiled in controversy and accusations of bias before.

When it opened in 2016, it failed to feature an exhibit on the career of Justice Clarence Thomas, currently the only black man on the Supreme Court. The museum initially only paid tribute to Anita Hill, the woman who leveled unproven accusations of sexual harassment against him.

What the latest incident, with the “whiteness” graphic, makes clear is how public memory and history should not simply be left to museums.

Many of those calling for the removal of “offensive” statues—which these days seems to include pretty much all of them—have suggested relocating them to museums.

But how can Americans trust museums to faithfully present history and not simply foist primarily hard-left political views on those who visit them or use their materials?

We see a similar problem with The New York Times’ so-called 1619 Project, which won a Pulitzer Prize. History is bent and distorted to fit a political narrative. It’s not about education, but re-education and indoctrination.

It’s clear that American institutions—whether they are our schools or national museums—are being used as vehicles to promote “critical race theory” and other divisive doctrines.

This radical transformation is accelerating. That’s why it’s essential for Americans who still believe in the truth to inform themselves and be willing to question and confront those who are cynically promoting this cultural revolution, which if left unchallenged will tear the country apart.