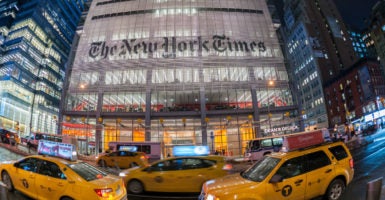 An increasing number of historians and scholars are voicing alarm at the historical inaccuracies of The New York Times' 1619 Project. (Photo: Richard Levine/Corbis via Getty Images)

Over the course of this week, the New York Post has published a series of op-eds attacking the 1619 Project—the controversial and erroneous history of America from The New York Times (see links to each op-ed below). Today, the New York Post features an op-ed by David Bobb, president of the Bill of Rights Institute. Bobb recently spoke to The Daily Signal about the 1619 Project. An excerpt from his interview is below and the full transcript is available here.

David Bobb: I’ve read the 1619 Project [and] went through the lesson plans. I was struck by one in particular. It was what’s called erasure poetry, and it asks students to take the Declaration of Independence and to block out all of the sections so that the remaining words would be the poem that they wanted to create themselves.

Think of what that exercise treats and really trains the minds of our young people to say, that the Declaration is a document mainly to be obliterated.

The Declaration was the thing that gave Frederick Douglass the hope and realization that he was a person deserving of rights and dignity.

The Founders were not perfect—no human being is—and I think the remarkable thing that we need to impress upon young people is not that we had, in the founding of the United States, an answer and a kind of determination of everyone’s rights in their fullness. We didn’t. But we did lay down the marker and we said that all human beings are created equal.

That was a marker that both indicted some of the Founders’ own actions as slaveholders, and set a standard by which Americans and future generations could look to and try to aspire to. The 1619 Project gets none of that aspirational element.

I think when you look at Allen Guelzo and Jim McPherson and James Oakes and Gordon Wood and others that have come to criticize that, and then be utterly dismissed by the editors of that project as irrelevant. “Well, who anointed them as our preeminent historians?” That’s been some of the response.

I think the debate that’s ensued is a good one and that’s the kind of thing that I think students can actually enter into.

One of those people that I just mentioned, Allen Guelzo, is a contributor to the Bill of Rights Institute’s Comprehensive History of the United States, that we just debuted at the National Council for the Social Studies.

We believe in viewpoint diversity, and what I lament about some of our publications, including the 1619 Project, is there’s not even a pretense of viewpoint diversity. It’s just saying this is it, and, unfortunately, it can amount to a conspiracy theory.

What you have to do, I think, is have an intellectually honest conversation. What we found is that teenagers are capable of doing a lot, and if you treat them as curious and engaged interlocutors, oftentimes they rise to the occasion.

The thing that I find is that the teachers all across the country mainly do not engage in conspiracy mongering. They’re mainly interested in trying to wrestle with these questions and put really important ideas in front of their students and then rely on those conversations to help propel those students into the fullness of citizenship.

More Critiques of the 1619 Project