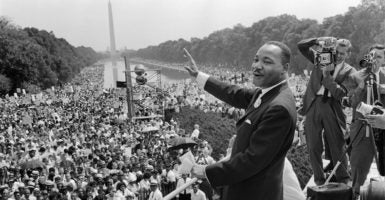 Martin Luther King Jr. waves to supporters in August 1963 on the Mall in Washington, D.C. during the March on Washington. (Photo: AFP/Getty Images)

Martin Luther King Jr. Day became a federal holiday when it was signed into law by President Ronald Reagan in 1983.

As Americans celebrate MLK Day, it’s important to recognize the contributions of King and the tradition of ideas he espoused that put him in the pantheon of great Americans.

The federal holiday may have been created in 1983, but the true origin of King’s legacy reaches all the way back to 1776.

Some of the loudest voices in today’s discourse insist that America’s origin is fundamentally flawed and broken. The New York Times’ recently-launched 1619 Project, for instance, aims to “reframe” America’s past to convince Americans that slavery and racism are the true heart of our civilization. The project’s headline essay declared that “our founding ideals of liberty and equality were false.”

While the study of slavery is essential to understanding America’s past, it is also vital to recognize just how much of a connection King had to the Founding Fathers and the ideas that animated them.

Those ideas were born in the context of a world in which tyranny was the norm. Political rule of, by, and for the people was no more than an experiment.

Much like Frederick Douglass, King didn’t shy away from criticizing America for failing to uphold the “self-evident” truths cited in its founding documents.

In particular, as I explain in my book “The War on History: The Conspiracy to Rewrite America’s Past,” King followed a thread of ideas stemming from Thomas Jefferson’s Declaration of Independence, through Abraham Lincoln, and finally to his own time when the equal rights of black Americans were being denied by much of the country.

King was not so small-minded as to reject the ideas of the declaration because its writer, a slave owner, failed to live up to them. Instead, he embraced those ideas as fundamentally correct and recognized how they were the key to bringing about a “new birth of freedom” in his own time.

In his Mountaintop speech of 1968, given the day before his assassination, King said the black men conducting sit-ins at segregated lunch counters “were really standing up for the best in the American dream and taking the whole nation back to those great wells of democracy, which were dug deep by the Founding Fathers in the Declaration of Independence and the Constitution.”

In his more famed “I Have a Dream” speech, King called the Declaration of Independence “the most eloquent and unequivocal expression of the dignity of man ever set forth in a sociopolitical document.”

He recognized the power and the truth encapsulated in that document, which laid the foundation for ending not only slavery, but laws that treated people unequally based on their skin color.

Even in the most tumultuous moments of racial tension in the late 1960s, according to historian Peter C. Myers, King “was deeply grateful for America itself, for its original and enduring promise, and its native propensity for reform.”

Regardless of its faults, King recognized that America stood as a unique bastion of freedom in a world in which liberty and justice were rarities.

He ultimately succeeded because he spoke in the natural rights language that the American people instinctively knew to be true.

King’s legacy is that he helped expand the founding promise of liberty and equal rights to all Americans. More than any other figure, he helped cash in that “promissory note” of liberty and justice for all, which the Founding Fathers had left.

In that legacy, King stands athwart today’s radicals who wish to tear America up by its roots.

As is the case with many great men, King was not without his flaws. He flirted with and even embraced failed socialist economic ideas, and fell short in his treatment of women, if recently unearthed FBI documents alleging gross misbehavior are true.

As with many great but complicated individuals of our past, King is worth celebrating in spite of his faults and limitations—as is America.

Life, much like history, can be messy and full of wrong turns, for man is fallen and imperfect. We aspire to be a shining city upon a hill, but that shining city will always appear dim in light of heaven.

Even still, King had faith that the American people, derived from all races and backgrounds, were attached in mind and heart to the ennobling legacy of 1776—the mystic chords of memory, as Lincoln would call it.

As the late historian and political philosopher Harry Jaffa wrote of King: “He dreamed of a day when the principles of the Declaration of Independence would be fully realized, not only in the institutions of American government, but in the spirit of American society.”

Contrast King’s ethos to those who today deplore “colorblind racism,” or target the Founders—including the man who wrote the declaration—for historical erasure. It would be a shame if we allow the noxious pull of identity politics to undo the work of King and others.

The American system allows us to preserve what is best about ourselves, while occasionally correcting our deepest faults.

King deserves enduring recognition from all Americans for his role in bringing civil rights to fruition and, in some ways more importantly, convincing the majority of Americans that racism stood in opposition to our founding and Biblical principles.

Our challenge today, as in King’s, is to preserve and further the legacy of 1776, and to inculcate informed patriotism among future generations so that they may have a fuller understanding of the right and wrong paths in their own time.