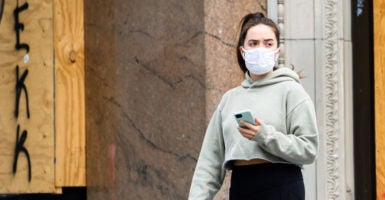 Prominent epidemiological models, such as those of the Imperial College in Britain and the University of Washington, have been seriously flawed in predicting millions of deaths. Pictured: A young woman with a protective mask May 31 at Union Square in New York City. (Photo: Noam Galai/Getty Images)

While combating the COVID-19 pandemic, federal and state officials must rely on the best available scientific data, including updated clinical information on the course of this mysterious disease and reliable epidemiological estimates.

Prominent epidemiological models, such as those of the Imperial College in Britain and the University of Washington, have been seriously flawed in predicting millions of deaths.

Sound policy planning based on a reliance on such models is difficult.

Statistical projections into the past—“what might have happened if”—bear scrutiny, even if developed by top-flight researchers at prestigious institutions.

A case in point is the finding of Columbia University researchers that the lives of 35,927 Americans could have been saved if public health authorities had imposed “social distancing” restrictions just one week earlier than they did. That finding was based on an analysis of disease transmission data over the period March 15 to May 3.

It should be noted that the Columbia study, though widely reported in the media, has not been peer-reviewed—the “gold standard” for academic acceptance in professional journals.

Like all professional analysts, the Columbia team also readily acknowledges the limitations of the study:

We note these counterfactual experiments are based on idealized hypothetical assumptions. In practice, initiating and implementing interventions earlier during an outbreak is complicated by factors such as general uncertainty, economic concerns, logistics and the administrative decision process.

In the case of the Columbia University study, let us assume that the methodology is rigorous and the math is correct, and that its number—35,927 deaths—is also correct. Let us also assume that the lockdown “flattened” the curve of infection.

But here’s the key question: Did this mitigation policy of “flattening the curve” prevent SARS-CoV-2 infections and the corresponding cohort of deaths? Or did it simply postpone them?

Before politicians seize on the Columbia study to resume the unprecedented lockdowns of social and economic life, they should consult a broader range of empirical evidence.

For example, Heritage Foundation analysts conducted an exhaustive analysis of the data and found that 92% of America’s coronavirus deaths occurred among persons 55 years of age and older (with 80% of them over the age of 65), and almost 90% of the deceased suffered from one or more comorbidities, such as cardiac or respiratory problems or diabetes.

In the Columbia analysis, researchers focused on six metropolitan areas, including “hot spots” New York and New Orleans. Heritage analysts also show that the mortality is geographically concentrated, with New York and New Jersey accounting for 44% of all COVID-10 deaths.

Not surprisingly, nursing home residents account for an estimated 42% of all COVID-19 mortality. That’s a clear failure of public health policy.

Even assuming the absence of an additional week of “social distancing,” as estimated by the Columbia researchers, a multiplicity of other factors also contributed to this pandemic’s mortality.

Just to name a few: communist China’s lack of transparency on the nature and spread of the disease during its crucial initial phases (December and January); the World Health Organization’s unforgettable Jan. 14 tweet, based on Chinese sources, that the deadly disease was not transmissible “human to human”; and the stunning regulatory failures of the Centers for Disease Control and Prevention and the Food and Drug Administration in February that inhibited early and aggressive American testing.

Second-guessing is unproductive. Going forward, however, we do have to ask ourselves: Are we able to set aside partisan rancor and have civil debate and discussion? Can we dispassionately ask ourselves about what worked, what didn’t work, and what we could—and should—do better next time?

Unless and until we can do so, we will not be prepared for that next time. And there will be a next time.