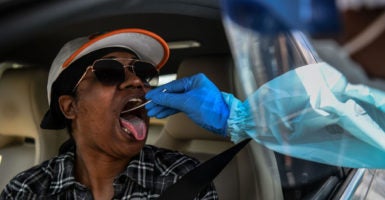 The coronavirus pandemic demonstrates with crystal clarity how the federal government’s vast regulatory apparatus governing health care can be an obstacle to rapid response in a national emergency.

We’ve seen this movie before.

The law of unintended consequences is an ironclad rule of public policy, and in health policy, that law can go berserk. The normal concerns that preoccupy economists and political scientists, wrestling with the day-to-day concerns about health care costs and access in government programs and insurance markets, pale in comparison with urgent matters of public health and safety.

The bureaucratic hurdles that in normal times are costly, time-consuming, and just plain annoying to doctors, hospitals, and other medical professionals can be downright dangerous when they undercut rapid responsiveness in a national emergency and pose risks to public health and safety.

Consider the dangerous delays in coronavirus testing. Research firms in both Germany and Japan quickly developed diagnostic testing for the new virus, and South Korea was soon testing large numbers of patients quickly. By comparison, the American performance was subpar.

On Feb. 5, the Centers for Disease Control and Prevention deployed the first diagnostic test, which proved to be faulty, and had to develop and deploy another one. At the same time, public health authorities were restricted to using the CDC test.

Writing in the libertarian Reason magazine, Ron Bailey reports, “The CDC insistence on a top-down centralized testing regime greatly slowed down the process of disease detection as the infection was accelerating.”

Meanwhile, the Food and Drug Administration, which gives approval for diagnostic tests, initially prevented academic and commercial labs from developing their own tests. For example, a research team at Johns Hopkins in Baltimore, a national center for clinical innovation in health care, was denied access to the CDC testing kit because it wasn’t a “public health” lab. It didn’t fit into the right bureaucratic box.

As Caitlin Owens, a reporter for Axios, noted: “Some of the nation’s best academic laboratories wanted to begin developing their own coronavirus tests early last month, but were blocked by federal rules about test development.”

On Feb. 29, the FDA relaxed its testing guidelines. After the agency issued an emergency use authorization, Roche, an international pharmaceutical giant, based in Basel, Switzerland, got approval to deploy its own diagnostic test to detect the coronavirus.

And, once given the ability to develop tests under more relaxed requirements, U.S. labs were able to get tests developed in days.

CDC and FDA officials have a huge responsibility. Widespread availability of testing is critical for public health authorities to comprehend the prevalence of the virus and to take the necessary steps to “flatten” the rising curve of infection.

During a serious pandemic, quality control is essential, and diagnostic tests that provide false negatives or false positives can make matters worse. At the same time, federal rules that inhibit first-rate academic centers or private research firms from entering the battle against a deadly threat defy commonsense.

These regulatory shifts on testing join others that will help expand access to the tests. The Trump administration is making sure people can get the tests by updating rules for government health programs, including Medicare, which mainly serves the elderly, who are at greatest risk the coronavirus.

The administration is giving plans the flexibility to waive or reduce cost-sharing for Medicare patients in areas impacted by the outbreak, including crucial testing or the use of telehealth to consult with medical professionals. And, if a vaccine becomes available, beneficiaries would be able to get it.

These steps to cut bureaucratic red tape are encouraging. They join others where the Trump administration deployed its regulatory powers wisely, from the assembly of a top-notch team of public health experts, including Dr. Anthony Fauci of the National Institutes of Health, to the president’s call on March 13 to expand the Department of Health and Human Services’ efforts to relax regulations getting in the way of the response.

There will be plenty of time for a serious, in-depth after-action review on the federal government’s response to the coronavirus pandemic. When that time comes, the Trump administration should assemble a blue-ribbon panel that will not only look into what went right and what went wrong, but also undertake a thorough review of the existing federal regulatory regime governing health care and determine which regulations can be dispensed with, either temporarily or permanently.

For now, a focus on clearing out the thorny underbrush of burdensome regulation should continue to be an immediate priority.