In a Retaliatory Move, the US Shortens Visas for Chinese Journalists 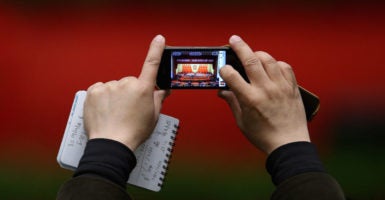 The U.S. is shortening the validity period of visas for Chinese journalists to a maximum of 90 days to reciprocate for China’s recent expulsion of American journalists and nonrenewal of visas. Pictured: A journalist takes photos during the fourth plenary meeting of the National People's Congress March 14, 2013, in Beijing.(Photo: Feng Li/Getty Images)

The Department of Homeland Security is throwing the next punch in the escalating journalism battle between the U.S. and China.

The U.S. is shortening the validity period of visas for Chinese journalists to a maximum of 90 days to reciprocate for China’s recent expulsion of American journalists and nonrenewal of visas.

This journalism visa tit-for-tat is just one facet of rising U.S.-China tensions related to Beijing’s mishandling of the coronavirus, which has infected the world.

In March, China expelled American journalists from The New York Times, The Wall Street Journal, and The Washington Post after writers criticized the Chinese government’s mismanagement of the coronavirus outbreak.

Beijing also demanded that those outlets—as well as Voice of America and Time magazine—give the Chinese government detailed information about their operations. The expulsion included Hong Kong and Macau, in addition to the People’s Republic of China itself.

Beijing argued the move was in retaliation for the U.S. limiting five state-run Chinese news organizations to 100 Chinese citizen employees who could work in the U.S.

The U.S. was set on May 11 to make the next move, by changing the terms of media visas for Chinese journalists.

The U.S. Immigration and Nationality Act authorizes “I” temporary visas for aliens visiting the U.S. as representatives of foreign information media.

To qualify, the alien must be a bona fide representative of foreign press, radio, film, or other foreign information media having its home office in a foreign country. This type of visa is also statutorily required to be provided “upon a basis of reciprocity” with a foreign country’s media visa terms and conditions.

U.S. Customs and Border Protection has, per regulation, been admitting foreign media traveling with “I” visas into the U.S. for a “duration of status,” as opposed to issuing a specific “admit until” date on the visitor’s entry record.

Duration of status is a much more flexible and generous term of admission that, in the context of foreign press, has been interpreted by Customs and Border Protection as the duration of the journalist’s employment.

In the Department of Homeland Security’s new rule published May 11, the department changes the term of admission for Chinese journalists from duration of status to a period not to exceed 90 days. The new rule does allow for extensions of stay, also for periods no greater than 90 days.

The DHS explains it is making this regulatory change toward China to achieve greater reciprocity between the U.S.’ and China’s treatment of foreign press seeking entry into the other country.

Unlike China’s journalist clampdown, however, the DHS rule change does not apply to the Hong Kong Special Administrative Region (SAR) or Macau SAR passport holders.

The DHS states in its rule change that “[i]nformation received from the Department of State, as well as open source information, demonstrates a suppression of independent journalism in [China], including an increasing lack of transparency and consistency in the admission periods granted to foreign journalists, including U.S. journalists.”

Notably, the reporters that the Chinese government expelled have reported on issues of interest to international audiences, but which are embarrassing to the Chinese Communist Party, such as its use of indoctrination camps, mass incarceration, forced labor, and corruption among the party’s leaders.

In addition, China has been shortening the media visas it issues to foreign press to periods of six months or less, as opposed to China’s prior 12-month validity period.

China has long used its foreign press to echo the Communist Party’s propaganda abroad, but those tactics have reached a crescendo following the coronavirus outbreak, which originated in Wuhan, China.

The Chinese Communist Party has used its money and threats to influence public statements made by others, such as international organizations like the World Health Organization, to initially downplay the severity of the infectious virus, followed by blaming the United States for the global outbreak.

The United States was founded on the principle of a free press and free speech. Given Beijing’s treatment of foreign press, and American journalists in particular, the DHS is right to reciprocally shorten “I” visas for Chinese media.

Further, the U.S. and all other countries need to strongly combat the Chinese Communist Party’s false coronavirus propaganda. After infecting more than 4.2 million people and instantaneously destroying economies globally, China owes it to the world to be open and transparent with scientific information about the virus.

Until China changes its ways, the Chinese Communist Party should not be rewarded with lengthy visas to spread its misinformation using American media.