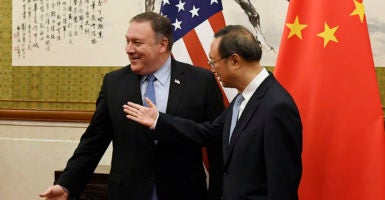 The outrageous expulsion of three Wall Street Journal reporters by Beijing last month over coverage of the coronavirus has set the stage for a long overdue change in U.S. policy toward Chinese media organizations.

This week, the administration ordered a reduction—from 160 to 100—in the number of journalists from four Chinese news agencies allowed to work in the United States.

Beijing routinely restricts access and visas to American news organizations. But the United States, with its open media environment, has allowed China and Russia to build sizable propaganda operations within its borders.

That free ride now could be coming to a halt.

The State Department announced Feb. 18 that Chinese reporters in the United States would have to register as officials of a foreign government.

The policy change will affect China’s five foremost news agencies—Xinhua, CGTN, China Radio, China Daily, and The People’s Daily.  Employees of these organizations will be subject to similar rules as Chinese diplomats in the United States.

Since all these outlets are, in fact, affiliated with the state or Communist Party, the designation of their reporters as “officials” is entirely accurate. In fact, all media in the People’s Republic of China is controlled by the state or the party.

What this means in practical terms is that the State Department will require the five organizations to provide names, personal details, and turnover of staff in the United States, as well as any property owned or leased in the U.S.

The Trump administration also reportedly is debating specific retaliatory moves against Chinese journalists in the U.S. According to some estimates, Chinese outlets have more than 500 reporters here, but only about 75 American journalists live and work in China.

A particularly egregious case was the threat the Chinese issued to Voice of America in 2017, which caused its management to cancel an interview with a Chinese businessman who was critical of Beijing. This case continues to have repercussions for Voice of America staff.

The change in U.S. policy is part of a package of initiatives to contain Chinese information warfare and propaganda. These initiatives include visa bans on Chinese officials involved in the mass detentions of Muslims in Xinjiang Province and new rules requiring Chinese diplomats to notify the State Department before visiting universities and research institutions.

Secretary of State Mike Pompeo sounded the alarm Feb. 8 about the threat of Chinese influence operations on U.S. college campuses.

“We can’t ignore China’s actions and strategic intentions,” Pompeo told the National Governors Association winter meeting. “The Chinese government has been methodical in the way it’s analyzed our system … it’s assessed our vulnerabilities and it’s decided to exploit our freedoms, to gain an advantage over us at the federal level, the state level, and the local level.”

The Trump administration finally appears willing to engage in the war of ideas that has been waged against the United States by China and Russia, among other foreign actors.

This is a welcome development and long overdue.