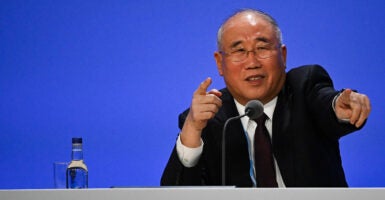 Europe is rapidly de-industrializing. German factories are going dark. French and Dutch farmers can’t afford to heat greenhouses. Millions of Brits are facing energy poverty. And Americans are still struggling to put food on the table or pay their energy bills.

These disasters largely all stem from Western leaders’ devotion to the cult of climate extremism, and the calamitous decisions to replace fossil fuels and nuclear reactors with wind turbines and solar panels. And the Chinese Communist Party wants to see more of it.

In fact, China is openly mocking the West’s commitment to the green delusion.

China’s top “climate envoy” (whatever that means) told his German counterpart that Europe, which is facing economic collapse because of its climate policies, needs to do more to save the planet.

“The climate policies of some European countries have shown a ‘backswing,’ and it is hoped that this is just a temporary stopgap,” said Xie Zhenhua, Reuters reported Thursday. Xie also reiterated calls for Western nations to meet their Paris Agreement pledge to give $100 billion annually to so-called developing nations. Xie, of course, considers China to be “developing.”

China’s foreign ministry added to the big joke, claiming in a statement the communist nation was on the path to becoming a green paradise “in contrast with the European Union,” according to Reuters.

Of course, Western leaders are still pretending as if China really cares about “the climate” more than economic stability despite all the evidence it’s not. U.S. climate envoy John Kerry is still desperate to wrangle a climate deal with the Communist Party.

Domestically, the Biden administration and Democrats are pushing forward with implementing the recently passed Inflation Reduction Act and its hundreds of billions in “green” spending. We can lead the world in green tech, they say. Nevermind the fact China dominates everything green.

As the International Energy Agency notes:

The Democratic Republic of the Congo (DRC) and People’s Republic of China (China) were responsible for some 70% and 60% of global production of cobalt and rare earth elements respectively in 2019 … China’s share of refining is around 35% for nickel, 50-70% for lithium and cobalt, and nearly 90% for rare earth elements.

Likewise, China controls 80% of global solar panel production and 77% of lithium-ion battery production. So, every step the Biden administration takes to throttle domestic oil and gas production and stymie new pipeline projects, while pushing more electric vehicles and solar panels, the more dependent we become on a genocidal regime for our energy needs.

But U.S. energy security is nothing compared to, as House Speaker Nancy Pelosi said Thursday, “saving the planet.” She wants the entire country to be just like her home state—barely able to keep the lights on and addicted to slave labor-made solar panels from China. China is laughing at us.

France is pushing a bill to speed up wind and solar deployment—meanwhile, its nuclear fleet has fallen into a serious state of disrepair.

“We need a massive acceleration,” French President Emmanuel Macron said. “I want us to go at least twice as fast for renewable energy projects.”

Of course, that’s not going to happen—supply chain snags, supply shortages, and, you know, potential economic collapse will continue to delay and run up the price tag for the “green” revolution. Plus, given Germany’s disastrous and expensive venture into renewables, why would France want to repeat it?

Meanwhile, the European Union’s big plan to alleviate their energy crisis is a windfall profits tax on energy producers. Because everyone knows the best way to get more of something is to tax it.

Not to be outdone, U.N. Secretary-General Antonio Guterres called for all rich countries to tax energy producers, which would then be funneled “to countries suffering loss and damage caused by the climate crisis” and “to people struggling with rising food and energy prices.”

How very progressive of him. My only question: Will China pay? No, but it’s definitely having a good laugh at our expense.