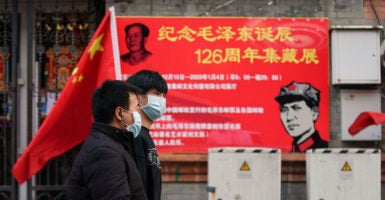 Protective masks are seen Tuesday on a commercial street in Beijing, China's capital, much of which remains shuttered in an attempt to stop the spread of the pneumonia-like coronavirus that has killed nearly 2,600 and sickened more than 77,000 in mainland China, mostly in Hubei province. (Photo: Lintao Zhang/Getty Images)

The Wall Street Journal should stand firm in the face of China’s action last week to rescind the media credentials of three Journal reporters and order them to leave the country.

Chinese authorities said the expulsion was over the Journal’s publishing a commentary by academic Walter Russell Mead headlined “China Is the Real Sick Man of Asia,” which addresses the communist nation’s economic fragility and the worldwide effects of a possible Chinese collapse.

The Chinese government claimed that use of the term “Sick Man of Asia” in the headline of the Feb. 3 article was racist toward the Chinese people.

Next, 53 employees of the Journal signed a letter demanding that the newspaper paper apologize and retract the original headline. They did this even though it is widely known that the Chinese government manipulates the media credentialing process to influence American news outlets to avoid criticism of “sensitive” topics.

The Wall Street Journal should not apologize. This is a ploy by the Chinese government that attempts to exploit Americans’ fear of political incorrectness to stir up racial outrage and gain power over the U.S. media.

Yes, the “Sick Man of Asia” term could be interpreted as archaic as some Asian activists alleged. Nevertheless, it is much closer to a historical term than a racial slur.

Unlike clear and obvious slurs against Chinese people and other racial groups (which are well-known), “Sick Man of Asia” has been used in many nonracist historical contexts as well as in current affairs. In fact, the first recorded use of the phrase was in 1896, in a Chinese newspaper called the North China Daily News, to describe the country’s humiliation.

Since then, the phrase has made its way into many scholarly works and journals. A 2011 article written by Foreign Affairs correspondent Yanzhong Huang describes China’s health crisis with the headline “The Sick Man of Asia.” Scholars have used the same moniker to describe other Asian countries.

Although not a flattering term, it’s probably the rhetorical equivalent of calling an African country “screwed up” or calling Russia a “kleptocracy.”

Naturally, however, the Chinese government has weaponized criticism of the Journal article’s headline to attack the free press and whip up a nationalistic frenzy against the United States.

The forced expulsion of U.S. journalists, including one who currently resides in Wuhan to report on the deadly coronavirus, forebodes a strong push to restrict critical media coverage in China as many residents continue to seek out ways to get noncensored news, especially on the coronavirus and the Hong Kong protests.

It is apparent that Chinese government is desperate to distract the Chinese people from its own free speech issues and economic turmoil.  As The Washington Post reports about the Feb. 19 expulsions: “The authorities also appeared to be attempting to stoke nationalist outrage in China at a time of extreme duress for the ruling Communist Party.”

Several weeks ago, a Chinese doctor named Li Wenliang tried to warn fellow citizens about the then-infant coronavirus, but he was suppressed and told off by Chinese police. Now Li is dead from that same coronavirus, and the Chinese people are not able to gain access to his potentially lifesaving information.

When Chinese citizens took to the social media site Weibo with the trending hashtag “We want freedom of speech” (#WeWantFreedomOfSpeech), the government quickly censored them.

As Mead argues in the “Sick Man of Asia’” article in the Journal, along with the Communist Party’s unprepared response to the coronavirus epidemic, China maintains a unitary power structure that may prove too brittle to handle unexpected “black swan” events such as viruses, terrorist attacks, and mass protests.

If the Communist Party fails, there indeed is little to stop China from going into a meltdown, with deleterious effects on the rest of the world.

Given the accumulated costs of decades of state-driven lending, massive malfeasance by local officials in cahoots with local banks, a towering property bubble, and vast industrial overcapacity, China is as ripe as a country can be for a massive economic correction.

Americans should not buy the Chinese Communist Party’s line. We should be allowed to criticize an increasingly oppressive, fragile government of an unfree country.

And by doing that, we aren’t being “racist” toward Chinese people— just as we aren’t being racists toward Koreans by criticizing the corrupt communist regime that runs North Korea.

Who are the Chinese people?  They are a large and diverse crop.  They include many Communist Party loyalists, but also many quiet dissenters. There might be more Chinese Christians than U.S. Christians by 2030—and many fear government persecution.

And then there are the protesters in Hong Kong. Many more are just living their lives, searching for better opportunities for themselves and their families.

As long as the Chinese Communist Party continues to oppress and censor its own people’s spirits, they will continue to search.

Chinese people have lived on this Earth for thousands of years. The Chinese Communist Party has been here for almost 100. Party leaders are not China, and they do not speak unilaterally for China. Nor should we pretend they do.