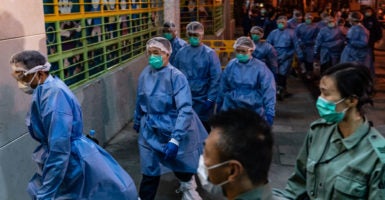 In the midst of the coronavirus pandemic, the People’s Republic of China has taken the opportunity to further close off the rest of the world’s view of its internal behavior.

Beijing’s Ministry of Foreign Affairs issued a declaration Tuesday that expels journalists from The New York Times, The Washington Post, and The Wall Street Journal. Chinese officials have ordered these reporters to hand in their journalist visas and permits within 10 days.

Those three newspapers, as well as Time magazine and Voice of America, must also provide China with a complete list of their employees, real estate holdings (presumably residences), and financial records.

This is the latest move in an ongoing duel between the United States and China regarding press freedoms.

On Feb. 18, the U.S. designated five Chinese entities as “foreign missions,” considering them agents of the Chinese Communist Party and therefore not really independent or private companies.

China promptly ejected three Wall Street Journal reporters, on the grounds that the newspaper had insulted China by referring to it in a headline as “the sick man of Asia.” The U.S. then placed a cap of 160 on the number of Chinese citizens who may work here at the four Chinese state-run media organizations.

China’s decision to place limits on the American news outlets is specifically couched as a tit-for-tat response to this latest move.

Importantly, the Chinese also placed firm restrictions on coverage not only of events in China proper, but also Hong Kong and Macau. Hong Kong, of course, has been the scene of extensive demonstrations protesting Chinese interference in its internal affairs.

Although Beijing would like to portray this latest action as merely a tit-for-tat maneuver, it occurs even as China also is trying to persuade the world that its responses to coronavirus have been exemplary. Its own admissions of “shortcomings and deficiencies” are being shoved down the memory hole in favor of a narrative that emphasizes that China bought the world time, which the West did not take advantage of.

Foreign reporters in China would only complicate this effort to rewrite history. (Ironically, The New York Times chose to publish an op-ed that parroted China’s version of reality.)

Even more troubling, Chinese officials have aired charges that COVID-19, which originated in the city of Wuhan, is, in fact, a result of American biological warfare operations.

Unlike in the U.S., this is not the product of private citizens’ conspiracy theories, but that of the Chinese Foreign Ministry spokesman, using his Twitter account.

The irony that the average Chinese citizen cannot even have a Twitter account only makes the situation more grotesque.