The Consequences of China’s Coronavirus Secrecy 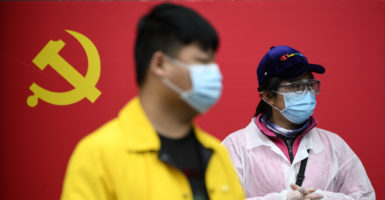 Precisely because the Chinese Communist Party is unlikely to be transparent, the constant undertow of conspiracy theories and rumors will remain unabated. Pictured: The party's flag provides a backdrop April 2 along a street in Wuhan, China, epicenter of the coronavirus pandemic. (Photo: Noel Celis/AFP/Getty Images)

As the coronavirus pandemic swept the world, questions about its origins inevitably arose. Yes, the virus came out of China, with the earliest analyses suggesting that it emerged from a “wet market” in Wuhan. But new theories are now making the rounds: Some claim that the virus may have escaped from a Chinese bioweapons laboratory; others suggest it might have escaped from other, nonmilitary research facilities.

With regards to it possibly being an escaped biological weapon, scientists familiar with the state of the art in virological research find no evidence that anyone has developed the ability to craft a new virus, the equivalent of creating new life from scratch. This is different than replicating or modifying existing viruses.

However, several analyses suggest that the coronavirus does not fit the structural profile of an organism for this purpose. Moreover, there are far better candidates for biological weapons (such as smallpox, bubonic plague, or hantavirus) than adapted coronaviruses, which more closely resemble the common cold.

More plausible is the possibility that it might have accidentally gotten out of one of the other research facilities near Wuhan. The Wuhan Center for Disease Control and Prevention, which studies bat viruses, is located near the now-infamous “wet market.”

Accidents occur around the world, and it is not impossible that there may have been one at the Wuhan facility. Chinese papers have, in the past, reported incidents of laboratory animals being sold for food.

Simply because something is possible, however, does not mean that it is what happened. It is quite likely there will never be a complete accounting of the coronavirus outbreak, especially how it spread into the human population, until China opens its archives and provides a full accounting of the events of late 2019 and early 2020.

Ironically, precisely because Beijing and the Chinese Communist Party are unlikely to be so transparent, the constant undertow of conspiracy theories and rumors will remain unabated.

What Chinese Communist Party authorities fail to recognize is that the absence of information does not lead to silence. Instead, it creates a vacuum, into which flows rumors and whispers.

But Chinese officials have consistently tried to conceal the extent of the problem, not only from outside observers but from their own citizens.

He and several colleagues were detained, and he was reportedly forced to sign a document admitting to making false statements that disturbed the public order. One Chinese  source reports that initial samples of the new virus were ordered destroyed.

Similarly, the mayor of Wuhan stated on CCTV (Chinese state television) that he had deliberately withheld information, claiming that he had to follow procedures before releasing any information. He stated this on Jan. 27.

Nearly two weeks earlier, there was already growing evidence of human-to-human transmission of the coronavirus, yet Wuhan had gone ahead with a district-wide potluck dinner involving 40,000 families. As important, as many as 5 million people had left the city before it was locked down.

Over four months into the coronavirus pandemic, Beijing continues this pattern. Chinese officials claim that there have been no new cases, and no fatalities.

But to take this at face value is to believe that the Chinese leadership can know what is happening in every quarter of a nation the size of the United States but with four times the population. It is to believe that there are no cases of the coronavirus in the prison camps holding a million Uighurs. And it requires taking the word of Chinese officials, who have expelled American journalists who might investigate independently.

Greater transparency on China’s part would go a long way toward both silencing the more outlandish rumors, as well as helping China fulfill its international responsibilities in the face of a global health threat.

But don’t hold your breath waiting for that to happen.