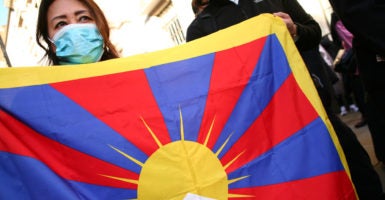 A demonstrator holds a flag of Tibet as activists rally Jan. 19 outside the Chinese Embassy in London in solidarity with the pro-democracy movement in Hong Kong and in protest of China's treatment of the Tibetan and Uighur peoples. (Photo: David Cliff/NurPhoto via Getty Images)

China now reports close to zero new cases of COVID-19 in Wuhan, the one-time epicenter of the new coronavirus outbreak.

This latest claim follows a string of other positive reports, leading many to extol China’s drastic containment measures and hold it up as an example of a country successfully fighting the coronavirus.

Numbers aside—themselves dubious, coming from a government that has lied about the crisis—those that praise the Chinese Communist Party’s approach often fail to mention its brutal suppression of information and use of the surveillance state to combat the virus.

The party, Financial Times reports, has been doing this by “closely monitoring people’s smartphones, making use of hundreds of millions of face-recognizing cameras, and obliging people to check and report their body temperature and medical condition.”

The coronavirus has exposed China’s authoritarian governance to the world, but the West shouldn’t be surprised. The Chinese Communist Party isn’t only repressive during health crises; the Chinese government treats its people this way all the time.

One group at the receiving end of this oppressive government is China’s religious minorities, for whom it is nothing new. They have endured the regime’s heavy-handed harassment for decades—harassment that continues even amid this public health crisis.

The governing philosophy continues to be seen in the regime’s brutal treatment of freedom of the press and freedom of religion.

Early in its coronavirus response, the Chinese Communist Party focused on suppressing news of the virus rather than suppressing its spread.

Beijing’s gross mishandling of the virus and its suppression of any reporting that might make the country look bad clue us in on the regime’s main priority: maintaining its grip on power even at the expense of its people’s lives.

While they dragged their feet before taking serious measures to slow the spread the new coronavirus, Chinese authorities were quick to crack down on reporting of the virus originating in Wuhan.

In late February, at least two Chinese citizens were forcibly “disappeared” after posting videos and images that demonstrated China’s struggles to adequately cope with the coronavirus.

When now-famous Chinese doctor Li Wenliang publicly warned that the virus could grow out of control, authorities reprimanded him and forced him to sign a document stating his warnings were false. He later died from COVID-19.

The extent of the cover-up knows no bounds as state media outlets remain entrenched in a campaign to blame the U.S. for the pandemic.

And with the world’s attention firmly fixed on the coronavirus as it started to hit Western countries, Beijing seized the moment to expel journalists from several major American newspapers. Such a move will prohibit unrestricted and accurate reporting on China long beyond the conclusion of this crisis.

Reporters aren’t the only ones feeling the Chinese Communist Party’s disdain now. Undaunted by the pandemic, China has continued its campaign of religious persecution.

On March 11, a church in Jiangsu province that had been closed due to the coronavirus was almost entirely destroyed by authorities and stripped to bare bones.

The Communist Party removed crosses from church buildings throughout March. The widespread removal of crosses, the traditional and universal symbol of Christianity, is part of a larger effort to “sinicize” religion in China.

Beijing is working to reshape Christianity into its own image and infuse it with “Chinese characteristics” espoused by the communists, including loyalty to the party.

Meanwhile, the Chinese Communist Party uses any opportunity to further oppress the beleaguered Uighur Muslim minority. In Xinjiang, where most Uighurs live, authorities imposed a strict quarantine without giving residents any notice.

While much of China has been under lockdown the past few months, the Communist Party hasn’t given religious minorities a break. Not even a global emergency can halt their religious persecution.

The suppression of the press that caused so much outrage is what religious communities across China experience on a regular basis.

A government’s response in time of crisis demonstrates its real values—those that guide its behavior even under great pressure. For the Chinese Communist Party, maintaining power is its most important value, and it will be pursued at any cost, even the health and well-being of its people.

The West should learn from China’s actions throughout this pandemic. The CCP can’t be trusted to allow honest reporting or tell the truth even during an emergency. And even in a crisis, the party’s oppression of religious groups will continue.

The COVID-19 nightmare will come to an end, but the Big Brother technology China increasingly employs will remain. World leaders should remember how China acted, and that memory should inform how we interact with the Chinese regime in the future.