What’s Really Happening in China With Coronavirus? 4 Things to Know 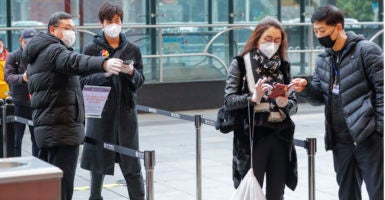 The Chinese government says it has lifted the lockdown for the province of Hubei, where the coronavirus first emerged, and has reported no new results for several days.

However, much anecdotal information has arisen to call the official line from the Chinese Communist Party into question.

Here are some of the key questions, along with partial answers, regarding China and COVID-19, the disease caused by the new coronavirus.

The question may not be answerable. The official Communist Party line is that there were more than 82,000 confirmed cases of COVID-19 and 3,300 had died from the disease.

“It’s difficult to get real numbers. They expelled U.S. journalists, so we have to rely on social media, but the Chinese Communist Party censors everything,” former Army intelligence officer Greg Barbaccia told The Daily Signal in an interview.

Residents of Wuhan—the capital of Hubei province and where the virus originated—say the number of deaths is closer to 42,000 in that one city, Radio Free Asia reported.

Seven large funeral homes hand out the cremated remains of about 500 people to family members each day, according to Radio Free Asia. Those funeral homes serve Wuhan, Hankou, Wuchang, and Hanyang. One supplier delivered 5,000 urns to a funeral home in Hankou in a single day.

Because the funeral homes informed families that they would try to finish cremations before the traditional grave-tending festival of Qingming on April 5, Radio Free Asia estimates that 42,000 urns would be given to survivors.

One Wuhan resident told the U.S. government-funded broadcaster that the Chinese government was paying hush money to the families of those who died from COVID-19, but under the guise of covering “funeral expenses.”

China’s government has canceled about 21 million cellphone accounts, according to the International Business Times, a development that some view as evidence of a higher death toll and relocations than what is reported officially. Another 840,000 landlines reportedly were closed.

China has reported that the spread of the coronavirus has slowed dramatically, with days of no new confirmed cases.

The government is conducting testing, but isn’t reporting the number of those who test positive but do not have symptoms, according to Caixin Global, an independent news agency covering China.

So, Caixin reports, if a person tests positive for COVID-19 but doesn’t feel ill, that person is excluded from the published results.

Although China says the numbers are going down, the country reversed course and again closed down movie theaters late last week shortly after reopening them.

“We can’t trust China’s figures. But we don’t have a basis for guessing,” Dean Cheng, a senior research fellow for Asian studies at The Heritage Foundation, told The Daily Signal.

“We know they have said [that] they changed their counting system for fatalities,” Cheng said. “We have no idea how many cases. That’s somewhat true everywhere. But in China, there is no basis to estimate that.”

3. How Is China’s Propaganda Effort Evolving?

In January, China’s government-run media tried to project transparency and even used the social media hashtags #wuhancoronavirus and #wuhanpneumonia, according to a recent study by the cybersecurity company Recorded Future. However, as conditions on the ground changed, so did the coverage by state-run media.

In mid-March, Chinese Foreign Ministry officials said the U.S. Army was responsible for planting the new coronavirus in Wuhan.

State-run media in China has targeted messages, according to the study. First they raise questions about the disease’s origins, then they favorably frame the Chinese government’s response in tackling COVID-19 within its own borders and abroad.

“Chinese overt messaging around COVID-19 has evolved over the course of this pandemic,” the study says, adding:

Insikt Group’s research has identified two distinct phases of Chinese overt messaging. The first, from January 9 through February 10, consisted of an initially informative public response that followed the progression of the outbreak. The second, from February 11 to the present, was characterized by shifts—shifting the blame for the pandemic away from the Chinese government, highlighting the prominence of [Chinese President] Xi Jinping as the leader of effective response, and shifting from China as the source of the pandemic to China as a global leader in its response.

4. What Are the Motives for a Disinformation Campaign?

China’s grand ambitions to project itself as the premier world leader by 2025 is complicated by the COVID-19 pandemic and related deaths.

“They are engaging in information warfare to the international community with a narrative [that] they are a victim of the U.S., while they are providing humanitarian aid to the world,” Barbaccia said. “This resonates with the countries getting aid.”

Cheng agreed that China is focused on projecting a strong global image to keep companies such as Apple, Nike, and Intel, while shoring up trade deals in South America and Africa.

But the more important matter is domestic, the China expert said.

“They are more worried about the internal security than external security,” Cheng said. “Concealing the number of deaths is a way to avoid panic. It’s not easy to lock down 1.3 billion people.”

He said the most consistent public relations message is casting doubt.

“China’s government, media, pundits, scientists, and diplomats have been on a consistent note [of] ‘We’re really not sure where this came from.’”